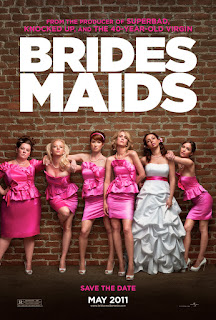 A woman whose life is spiraling out of control, attempts to juggle her personal life and her duties as Maid of Honor of her best friend's wedding without losing herself, her role in the wedding, and her best friend.

After eating food at a sketchy restaurant in the city of Milwaukee, the crew developed food poisoning while wearing prospective bridesmaids dresses in a prestigious bridal store.

"Before you make those kinds of demands, you should put a note on your door that says, 'Do not come into my room and read my diary and wear my clothes.'"

Bridesmaids is a film that is completely out of left field from what it's poster and trailer presents. And this is not exactly a bad thing. Going into the film, there were expectations of a second coming of The Hangover (The first one of course), except that it was the female version. However, Bridesmaids is far from a Hangover copy-cat. Yes its funny, has similar raunchy humor, and involves a wedding, however, the overall plot is funny, has depth, and is one that has a change of pace which accentuates the humor that much more.

Instead of a crash-like plot of random things occurring for humor, Bridesmaids develops humorous moments within a plot of Annie Walker's struggle to get her life together.  Kristen Wiig's was great as the confused and wacky Annie. Also, the constant subtle battle between Annie and Helen Harris is comical, and not to be out-shined by the character of Megan, played by Melissa McCarthy, who happened to receive an Oscar nomination for her role in this film.

Overall, Bridesmaids should not be stereotyped or judged based on its cover. It is a very funny film, and is a great example of the year women had in comedy in 2011.