Improving Education, Nothing But Lip Service By Us 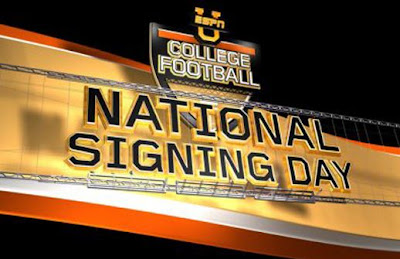 Every Saturday fans pack 100,000 seat stadiums and fill arenas with wacky chants, movements, and traditions in support of their favorite Division I collegiate schools and teams. Like a widespread plague, our nation's fascination with school and civic pride is admirable, well deserved, and honored. We cheer, we jeer, we shake our heads in disgust, we cry on senior day, and we become elated on what has become the biggest joke of a day in our society - national signing day. A day where collegiate fans are filled with hope and excitement as seventeen and eighteen year old boys across the nation are pampered and coddled as we await the defining moment of their selection by placing a simple on hat on their heads.

Yes, this day specifically defines college athletics. And because of this day is why I have so many problems with Division I football and basketball athletics.

The idea of collegiate athletics at its core is one that I can thoroughly get behind and encourage. Young adults in the most formidable and impressionable times in their lives being exposed to athletics that not only gives them new experiences, but reveals their understanding of themselves as individuals, and expands their horizons on life. And for the non-student-athletes, it provides an avenue for investing in your school and its pride.

All of this, of course, while gaining an education at said college/university.

Because regardless of whether such an institution operates as a business, education is it's service, no?

Nonetheless, over the past few decades, we have seen collegiate sports turn into a shell of its purpose, emphasizing unethical doings and law breaking practices to ensure top recruits, and yes, winning.

We've seen questionable actions by coaches, men who look parents in the eye and swear to continue the process of helping their son mature, but instead encourage such head-shaking behavior. These men destroy programs along the way at the cost of winning, before leaving all promises, handshakes, and binding contracts behind to do it all again at another institution.

In fact, we've seen institutions operate as professional teams, where the collection of banners and trophies inside the school gymnasium's lobby is more important that the amount of graduates and degrees it issues.

Yet, without getting on my soap box to throw darts at the NCAA, my real issue with is with us.

For a nation that is now on the road to a presidential election, we all continue to push the topic of education, and possible education reform in front of our candidates and the current President of the United States. We look to our government to emphasize better policies and programs to help cease the decline in our nation's system, while trying to catch up as the rest of the world pulls away. We tell our children to stay in school, to study hard, and to embrace science and technology as the path for the future. We, as a society, as a culture, as a leading nation in the world, emphasizes education and it's benefits to our youth.

Yet, when kids turn on the television, all they see are the those same seventeen and eighteen year old boys surrounded by lights and cameras in the midst of the hype and adulation as they are lauded for their selection. Never is the free education via their new scholarship to these top colleges and universities mentioned. And why should they be? What's education got to do with it?!

Can you not hear Tina Turner professing the message of National Signing Day from with her powerful voice?

What kids see are a fast-track to fame and prestige. Achieving a 4.0 40 yard dash is more important (and sadly more believable to achieve to some) than a 4.0 GPA. March Madness is more important than anything that can be offered in academia.

And we won't even dive into the concept (and disaster) of giving such young men this forum. We wonder where the narcissistic culture in our pro sports stems from.

What's even more outrageous? How about the amount of kids that actually earn a degree after their Signing Day experience - under 50%.

But who can blame them, right? After all, education doesn't matter and aren't celebrated by these institutions.

While in the midst of putting together this post, I ran into another opinion piece on foxsports.com by Jen Floyd Engel. Engel's approach is very similar, and also wonders where the big celebration is for those with brilliant minds who have selected their choice of high learning. Most likely, the future bright minds of America, and the ones that can possibly change this nation for the better. Where is their National Signing Day?!

It doesn't exist. Because for all of the lip service we give about education in our country, what we truly celebrate is Saturday mornings.

And who do we have to blame for that?