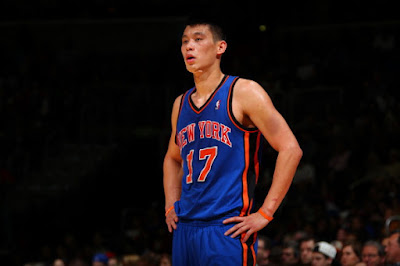 If you live in New York as of February 9th, 2012, how can you not be wrapped up in the current sporting euphoria? Fresh off the heels of a New York Giants Super Bowl win, the sporting world has given us the wonderful story of one, Jeremy Lin. Who? Yes, Jeremy Lin. And dare I say, Lin is the most interesting, compelling, and inspirational story going today. In the midst of a terrible time where everything seemed down in the doldrums, the New York Knicks have found a gem, or as one sign said last night in Washington D.C., "Crouching Tiger, hidden point guard", to fill a dying (and I do mean dying) need on their team.

So, who is Jeremy Lin?

He's an undrafted point guard out of Harvard that has been cut twice (Golden State and Houston) and was claimed off of waivers by the New York Knicks. He was overlooked by draft scouts because of his Ivy-league background, and yes, as much as some may look to deflect it, because he is an Asian-American point guard.

In fact, Lin scored 30 on Kemba Walker and the soon to be National Champion UCONN Huskies in college, outplayed the first overall pick, John Wall, in a summer league game, and recently has made NBA point guards look silly, which included, arguably, the best point guard in the league, Deron Williams.

After all of that, Lin's legend has grown to what is now being billed as Lin-sanity in New York City. And while it has only been three games, New Yorkers, and especially Knicks fans who have endured a pretty boring and fruitless season, Lin has been downright riveting. From the flashy passes, to the hustle, to the quick first step, and the bright smile that captivates the city, it has lifted the spirits of Knicks fans who have become so tired of seeing Carmelo Anthony hold the ball as if he had stick' em on his hands before throwing up ill-advised shots without any remorse.

Yes, somehow, Lin-sanity has taken over New York City.And it has been Lin-sane.


Imagine that? Wrap your mind around this for a bit.

Jeremy Lin is revered, and Carmelo Anthony's reputation in this city is met with a collective groan or those infamous chants of "pass the ball" with every touch in the Garden.

[side-blog: Carmelo Anthony haters need to relax. He'll be fine and eventually fit into the system.]

The last time I've been this excited about a New York Knick was indeed four years ago when we drafted Danilo Gallinari. His upside was tremendous, and there was just something about him that captured this city. And let's be honest, there is always something to be said about a homegrown player. We love them. Even more so than the high-priced new free agent signing.

With that said, that brings us back to Jeremy Lin. Our find. Our guy.

D'Antoni, despite recently "fending off the posse" as he claimed as his coaching seat warmed prior to this week, has been known to get the most out of average players. Especially, making point guards into superstars. Chris Duhon and Raymond Felton, come to mind. Maybe, just maybe Lin is that next guy for us. John Starks was once bagging groceries before he became a main stay for the Knicks, and yes, yes, (oh yes!) once dunked on Horace Grant and Michael Jordan.

Nonetheless, it's hard not to see why we are enthralled with Jeremy Lin.

And watching Lin, a player with high I.Q. (come on, he went to Harvard!), is 6'3'', has a very quick first step, and can indeed run the pick and roll, there is no surprise he is flourishing. And most importantly, these qualities provide basis that what we are seeing is not fool's gold.

The kid can ball.

And since he's been the starting point guard, all the Knicks have done is Lin...err, win.

Still not convince? How about this bit of information? Lin is the first player since LeBron James to post two consecutive games of at least twenty points and eight assists in his first two career starts. Before LeBron, it was Isiah Thomas.

Better yet, let's not even mention that name with the Knicks.

Will he keep up this crazy pace? Probably not.

However, the potential is hopeful, his play is infectiousness, and well, its just been downright fun to witness.

Who knows how far this goes? But for now, reveling in the Lin-Sanity has been amazing.