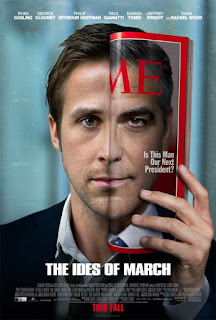 An idealistic and star political staffer works for a Presidential candidate who he believes in, but quickly gets a crash course on dirty politics and the shallowness of the industry.

After being fired from the campaign by Paul, Steve heads over to the rival candidate's office to take Tom Duffy up on his job offer. Only, he learns that he was set up by Duffy to get him away from the Morris campaign by any means necessary. Steve quickly learns the reality of the situation and the politics business.

"I'm not a Christian. I'm not an Atheist. I'm not Jewish. I'm not Muslim. My religion, what I believe in is called the Constitution of United States of America."

Ides of March is a very good film. In fact, it is a film that will very much alter the way you look at politics, more specifically, the politics that happen within campaigns. From the way the speeches are written, the tactical rhetoric they say, to the positioning and strategy course taken, Ides of March reminds the public of truths they already knew, and exposes other happenings they did not know. However, beside the relative aspects, Ides of March is gripping with a roller-coaster-like plot that slowly builds before reaching the apex, with everything to coming to a head quickly.
Ides of March does not lack in acting quality boasting an all-star cast of Ryan Gosling, George Clooney, Phillip Seymour Hoffman, Paul Giamatti, and Marisa Tomei. Rest assured, you will not be cheated in the talent department.
All in all, Ides of March is a solid movie. Everything from the acting, screenwriting, production, and the presentation will not disappoint. With a 2012 Presidential election on the verge, wouldn't be a bad way to invest 101 minutes.