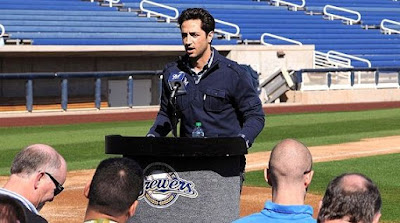 Ryan Braun stood in front of a microphone and thoroughly told us about a glitch in the Major League Baseball drug testing program that red flagged him as a user. He spoke of the poor procedure and action taken by the collector, Dino Laurenzi, Jr., and vilified Laurenzi as the only "suspect" that could have tampered with his sample. Braun, who is now hailed as a vigilante in baseball as being the first to ever win an arbitration appeal against the league, is now seeking to regain his clean name and reputation.

Yet, as baseball continues to heal from the black eye that was the steroid era, the recent Braun situation brings about another blemish that causes eyes to turn upon the league like that disheveled girl at prom who just walked in.

And quite honestly, fans should be more upset with Braun than the never-ending steroid news.

In my eyes, it's because Braun is a fraud.

Here are the facts we should focus on:

Something is amiss, and it is definitely Ryan Braun's testimony.

Braun is no switch-hitter on the field, but his defense and story proclaiming his innocence has definitely taken on a new side.

Yet, while Braun may have won the appeal due to the technicality, his innocence is far from being proven.

In fact, Braun's sudden flip-flop reeks of a guy no longer caring about proving his innocence, but rather escaping this situation.

He's as guilty as it comes in the court of public opinion.

Whether he is guilty or not, this clear and sudden change is the basis for fraud.

Somehow, Ryan Braun wants us to believe that Laurenzi, who handles hundreds - thousands - of these samples a year, had it out to ruin him? That somehow, a native Milwaukeean and a Brewers fan nonetheless, would somehow taint his sample. For what reason?

I can understand MLB's frustration and anger with the ruling. For years they've tried to catch the bad guy, and some how they just let one go.

In the case of past cheaters, we've vilified them for their crime against the beautiful game. Even those who have never been proven and have denied it, and will do so until their grave.

Braun, has somehow cheated the game of a clear and decisive MVP award, and has escaped the law that was promised to make examples of these types.

Going forward, there is a part of me that just cannot trust Ryan Braun.

And sadly, we'll never know or learn the truth from this situation.