Dome Pondering Movie Review: Get Him To The Greek (2010) 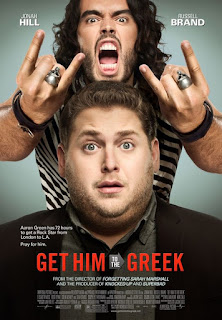 A young music company intern comes is summoned to accompany an out-of-control rock star from London to the Greek Theater in Los Angeles in time for a concert that can help turn around the company.

When Aaron and Aldous arrive on set under the influence for the Today show, and all of the crazy and embarrassing things that happened to Aaron during their time there.

"When you hear about someone and then you meet them... That's happening now."
Review:

Get Him To The Greek, honestly, is a comedy that tries. It really does. A film that is a spin-off of Forgetting Sarah Marshall, using the very entertaining character of Aldous Snow played by Russell Brand in the film, seems like such a good idea on the surface, but the overall film does not meet the potential or expectations.

Get Him To The Greek simply comes off as a movie that is trying very hard in its comedy with over-the-top scenes, vulgar language, and crude scenes. It has that feeling The Hangover 2 had of throwing everything at the wall, except, Hangover 2 had previous nostalgic credibility to help the viewer through the film. The film had it's moments, but ultimately, seems flat.

One of the major problems? For a film that has a plot of a journey between two characters, not once will you ever get the that feeling. The film focuses so much on it's poor attempts for humor that is does not develop any sort of bond between Aldous Snow and  Aaron Green.

As for the cast, it's rare to hear this, but Russell Brand was by far the most entertaining in the film. Jonah Hill left much to be desired, and Sean "Diddy" Combs just exemplified the overall eye-rolling, trying too hard to be funny vibe the movie had with his performance.

Honestly, this movie is the perfect on-the-television-background type of movie. Anything further than that, stay clear of this one if you are looking for a laugh.