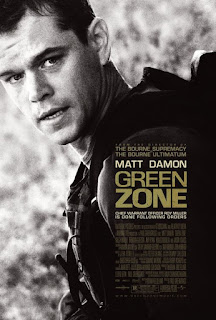 A battalion chief is tired of being mislead due to politics and hidden schemes and goes rogue to uncover the real truth about WMDs and the war in Iraq.

After Al Rawi escapes and is now on the run, the United States military closes in on him with Miller and Briggs chasing him on foot.

"It is not for you to decide what happens here."

Green Zone is a very good film. Very good. Most war movies are, but there is something gripping and gritty about Green Zone because of its current relevance and easy-to-relate nature taking place in a 2003 version of Iraq - when the war began.

The film's best attribute is it's constant action and storyline development. The viewer will always be engaged and always intrigued in the next move for Miller and his squad. What really makes Green Zone is the scenery, combat scenes, and the overall feel of the film. You really feel as if you are on the ground in Iraq, and the camera work, action shots, and angles really help as it gives the feel of constant urgency and chaos.

And as usual, Matt Damon was stellar. Not sure what else can be said about his work. Just another great film.

More so, Green Zone really gives you a peek of the Iraqi side of the war, and also is a movie that will begin the thoughts and conspiracies regarding our government and the war in Iraq.

As said before, a very, very, very good film that is worth the watch.