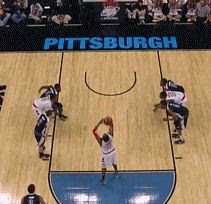 10. Thinner Free Throw Key - I understand that there are different rules on all levels of basketball (amateur, professional, international), but I never quite understand this one in basketball. Both the NBA and international basketball both have 16 feet wide key areas, while the NCAA is 12 feet wide. Why the reasoning for a smaller key? Does it bother me? Not so much, which is why it is so low on this list. However, the subtle and useless reasoning behind the difference is why it makes the list. 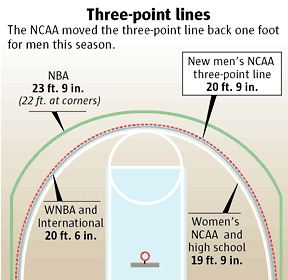 9. Three Point Line Distance - Several years ago, the three point line was even closer than it is today, which was equal to where the women currently shoot from. It's almost baffling to think about. However, while it was moved back a foot, the line is still significantly closer than that of the professional distance. Once again, why? It marginalizes the game. Ever watch a game where both the college and professional likes were on the court? Players shoot from the NBA distance, anyhow. 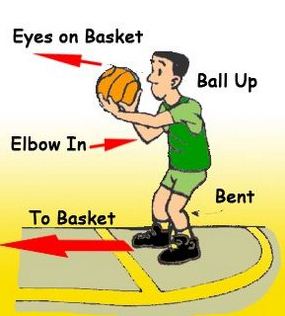 8. 1 and 1 Foul Shots - Never understood the reasoning for bonus and double bonus fouls. Ugh. A one and one? No where else but college basketball. It seems like more pointless rule quirks. 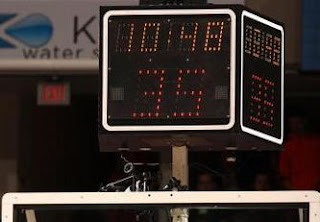 7. 35 Second Shot Clock - Now that the slight things that irk me are out of the way, let's get to those that annoy me. The first being the 35 second shot clock. Nothing like watching a team come down the court, use up thirty seconds passing the ball around the perimeter before eventually giving it to their best player for an ill-advised shot. It's bad enough the product lacks mature shooters, we must slow it down further with unnecessary long possessions. Nothing like 50-49 ballgames. See most tournament games. 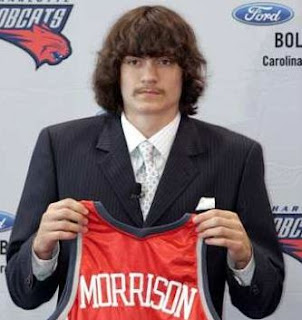 6. National Player Hype - How many times have we heard from Dick Vitale and others that the NCAA product produces the best players for the NBA than anywhere else? I'm sick of hearing about these kids being potential franchise-changing athletes and being billed as such because they are a "diaper dandy". It is proven there is no correlation between success in the NCAA and it carrying over into the NBA. None. 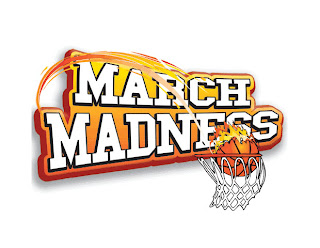 5. Hype Around Tournament - I've said it before on twitter, and I will say it again, the NCAA tournament is the worst playoff system in all of sports. I'm sure college basketball enthusiasts will argue that it creates excitement and does not drag on like the NBA playoff. Both valid points, and both are true. However, it is fact that interest (and ratings) in the tournament falls off significantly after the first round and continues as the tournament goes on. Honestly, the NCAA tournament's "excitement" is derived from gambling - people with tournament brackets and pools" rather than interest of the product. It is by all means not boring, but once again, vastly over-hyped and overrated. 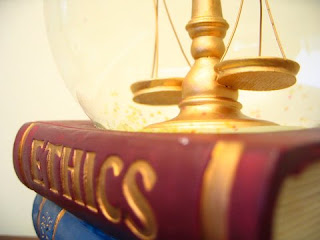 4. Ethics - The ethics in NCAA basketball is much worse than pro ball. The scandals, the cheating, and the recruiting violations for starters. And the two in which I absolutely despise - the coaches in college basketball that have no respect for contracts (and some, their institutions), and the clear and utter disrespect for the education and the sanctity of the student-athlete. 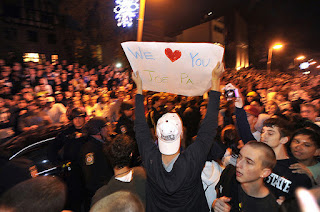 3. Blind Logic and Loyalty - Pro sports fans have no problem being honest, logical, and critical of their favorite sports team if they deserve it. This includes the organization and the front office. For some reason, in college, it's a "protect the school at all cost" mentality. And let's not even go into how some coaches are treated as gods. Simply see the Penn State situation or the Bernie Fine case in Syracuse as examples. It is never the fault of the institution. 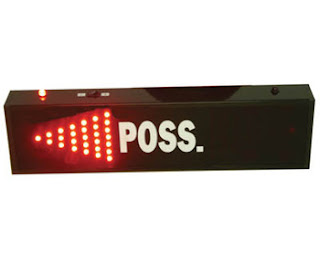 2. Jump Ball Arrow - This reaaaaaaaaaaaaly annoys me! What is the purpose? Who came up with this horrendously idiotic idea? Okay, we got the ball last time, so it is your turn! Ugh! It serves no purpose, does not reward defenses and is completely false advertising on the name of the violation. Jump ball? Ha! 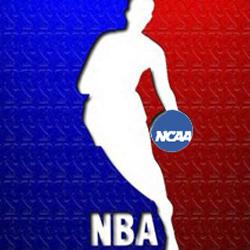 1. NCAA is Better Product Myth - I laugh when college basketball fans tell me that NCAA basketball is a better product. They actually play defense in college. They play harder. They play for love of the game instead of money. The game is a better game, fundamentally. Look, I like college basketball, but all of those are incredible false. The NBA has the best basketball players in the world, period. Defense looks stronger in college because shooters aren't as skilled and point guards don't handle the ball as well. College basketball players are playing with the same love and drive - to win a National Title and to get to the pros - as the NBA players are - winning a championship and getting paid. And the game only looks more fundamental because it is not as advanced as the pro game. These excuses need to stop. The College basketball product is what it is, a nice niche for areas with no pro teams, or a nice substitute for nights the NBA is not on teleivision, or in the case this year, in a lockout.