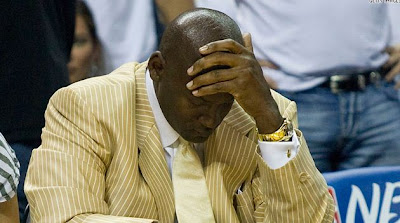 
An old co-worker and myself used have a running game where we would attempt to come up with opinions that people may have that are so crazy, the opposite should otherwise be deemed as fact. After all, there is no way the above statement can be taken seriously, right?

However, after the recent futility of the Michael Jordan-owned Bobcats, overrated may no longer an impossible word in describing his "Airness."

Before some of you are quick to pull the trigger on closing your mind on such a thought, I simply ask that you remove Michael Jordan the basketball player from this evaluation. We all know, MJ is the greatest of all time. There is, and possibly never will be any debate in that regard.

However, as for MJ the executive, the word "overrated" is very much in play.


When Jordan decided to take his basketball smarts to the front offices, everyone had high hopes. The greatest basketball player, and possible mind of all-time, in charge of basketball operations? A no brainer, right?

Jordan, in his first stint as President of basketball operations with the Washington Wizards did not accomplish or meet the success everyone expected from the usual everything-he-touches reputation he has. In fact, looking back, Jordan drafted Kwame Brown with the #1 overall pick in the 2001 NBA Draft over players such as Tyson Chandler, Pau Gasol, Richard Jefferson, Jason Richardson, Joe Johnson, Shane Battier, and Zach Randolph. Jordan, in desperation, even came out of retirement in order to jump start the franchise.

And now, as majority owner of the Charlotte Bobcats, Jordan is on record as owner of the worst seasonal team in the NBA. And yes, that is ever. Of all time. In all of history. 7 wins and 59 losses in a strike shortened 66-game season.

And somehow, Jordan remains unscathed amongst some.

Michael Jordan the owner isn't donning the famous number twenty-three. He's not going to soar through the air switching the ball in his hands, or even knocking down one of his patented fade-away jumpers.

Other great players who have tried their luck off the court such as Isiah Thomas have been scrutinized and blasted by everyone for their ineptitude. And believe me, as a Knicks fan, I am well aware of Thomas' failure. Yet, never has anyone given Thomas the benefit of the doubt. His career as one of the greatest point guards the league has ever seen does not grant him a pardon.

Somehow, we continue to offer this free pass to Jordan. We continue to grade his executive career based upon what he has done on the court.

After leaving the game for good, Jordan hasn't done anything at all that warrants a free pass.

Charlotte, a once hot bed for NBA basketball, have all but given up on the franchise.

And now, with continued mediocrity and franchise inadequacy, his overall reputation is at stake.

I've seen too much from MJ to ever - ever! - count him out. It's early, and there is still time to turn this situation around.

However, if we fairly observe Jordan's executive career thus far, and unbiasedly grade it without influence from his playing career and how we would like to remember him, it has indeed been overrated.

Who would've ever thought?