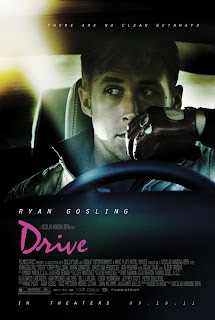 A mysterious and introverted stuntman, mechanic, and professional getaway driver must work him self out of trouble in attempt to help a neighbor and her kid, whom he has become fond of.

After a robbery goes terrible,  the driver takes off with an accomplice of the robbery who escaped. After a chase scene, they find safety for a few moments before they come under gunfire from someone who is out to get them.

Driver: [watching a cartoon] Is he a bad guy?
Benicio: Yeah.
Driver: How can you tell?
Benicio: Because he's a shark.
Driver: There's no good sharks?

Drive is a film that has been acclaimed by many. It has been heralded as one of the better films that was not nominated for an Oscar in 2011. Unfortunately, for all the praise it receives, there is another side on how Drive is percieved, and that is where this review will fall. In a nut shell, Drive isn't a film for everyone.

Ryan Gosling - who is always great - does a phenomenal job in playing the mysterious, lead character, whose name is never revealed. The film goes beyond Gosling and does a great job in providing some cool chase scenes and the typical guts, gore, blood, and violence we all shamelessly love in films.

However, what makes the film tough to watch is the slow and dull build in the first hour of the film were the relationship between Gosling's character and his relationship and ties to everyone else is formed. It is during this time where the film drags and leaves the viewer wondering, what happened to the film that started off with such intrigue and suspense in the opening getaway scene?

Drive also adds a bit of art and poetic cinematography with it's use of an eighties-style soundtrack and lack of overall dialogue between specific characters.

All in all, Driver is different. And for some, it maybe a beautiful love story, and for others, its a failed action movie.

Somewhere in the middle is the truth.