Pat Summitt: All That Is Good About College Basketball 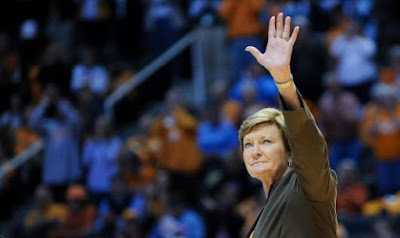 I often get verbally jumped by a few DP devotees about my views on college athletics - especially recently, with the latest Pondering 10 list (Issues/Annoyances With College Basketball Product). Ant to be honest, much of the criticsim and feedback is justified as I admittedly am not engulfed into the world of college athletics as some are. I'm in the group that thinks paying $50-plus bucks to watch amateur basketball, or to even attend a scrimmage/intra-squad game in April along with 70,000 other fans, is simply crazy.

I do like college sports. Just not that much. And my reasoning lies in the poor ethics and morals exhibited. This reason was magnified recently with the story of Wisconsin Head Coach Bo Ryan and the university's utter distaste in placing restrictions on student-athlete Jarrod Uthoff.

Without further getting on my soap box regarding the NCAA's ridiculous rules, I will just leave it as being just another example in furthering such a rant - which is due in the future. How a student-athlete, looking to transfer is forced to sign a scholarship document that prevents him from transferring to twenty-eight schools if he chooses to leave, is beyond me. Non-compete agreements in college athletics? Really?

Better yet, anyone else find it funny that the NCAA allows an eighteen year old, who can't be advised by professional help on such contractual tactics, to sign an agreement?

Yet, if Bo Ryan wanted to, he has the opportunity to leave, break a contract with a school, and turn his back on all of those recruits he locked into the program, to seek a better option for his career.

I hate to say it, but the NCAA is creating a culture of student-athletes being uses as race horses. No voice. No representation. Play. Win. Get us money. And if you want, go to class.

However, with that out of the way, I will say that there are a lot of things to like about big time D1 College athletics. One of those reasons, just happened to step down today in Pat Summitt.

Women's basketball has never made a major dent in our mainstream culture, yet, the job in which Summitt has done over her career at Tennessee is remarkable. The fact that she stayed at one school, built a powerful program, won titles, changed lives, and oh yes, actually graduated her athletes and prepared them for the real world, is a rarity in today's college athletic-bandit world.

Coaches such Summit, Coach K at Duke University, and many others who are either doing it under the radar, or at smaller schools, represent all that is good about college basketball.

I'm speculating, but I am sure Summit didn't have to trap recruits at Tennessee. She recruited. She motivated. She molded. She improved. She influenced. And she graduated her recruits. The program and her leadership sold itself.

Thanks to twitter, and the recent power of social media-public persuasion, Wisconsin decided not to enforce the contract, and will allow Uthoff free reign to contact schools except (of course!) for Big Ten schools.

It is a shame it took such a public outcry for a program to do the right thing.

And who knows how many other student-athletes are being bound by such a ridiculous concept?

Sadly, with Summit, one of the last pure and great things about college basketball remaining, now retired, this NCAA culture is on pace to get worse.

And it will stop at nothing to rack up wins and bring in revenue, all at the student-athlete's expense.