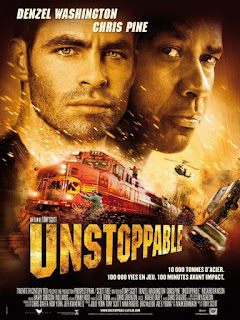 One veteran conductor, and a conductor in training work together and risk their lives to stop an unmanned runaway train from causing a major catastrophe in Pennsylvania.

When Dewey stepped out of the train to manually change the track switch, and eventually could not get back on to the train as it gets away from him.

"This ain't training. In training they just give you an F. Out here you get killed."

Unstoppable is an interesting movie. There is a lot of good, and equally, there is a lot of bad. What there is for sure, is a pretty good actor named Denzel Washington (heard of him?) that as always, delivers a pretty engaging and entertaining performance. There are also some recognizable faces and talent that grace the screen as well.

For the good, Unstoppable has a very unique and suspenseful plot. The idea of a runaway train is rarely done, and also lends as a chance for those not too knowledgeable about one of the oldest forms of transportation, and how the entire system works. The film delivers a lot of drama and is a film that will keep you hooked to the very end.

On the other hand, there are moments that simply make you laugh, and not in a good way. The film has moments of cheesiness and predictability that makes it very cliche. It's obvious the runaway train will be saved, however, there are moments where the film channels Final Destination as crazy things just happen in order to evolve the plot. Switches suddenly moving on their own? People driving across railroad tracks and not paying attention? Cars suddenly not being able to start while perfectly positioned on the track? Just seems a bit far-fetched. Also, many of the lines and reactions seem a bit cheesy. However, that is the usual with your typical adrenaline rush films.

All in all, Unstoppable has its good and bad, but overall it is watchable, entertaining, and a solid film.