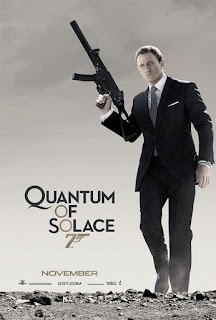 Seeking revenge on the death of his love, Bond chases a mastermind environmentalist that is also looking to take control of South America's water resource.

The opening car chase scene where members of the organization is after Bond. We later find out why, as he held a vital member captive in the trunk of his car.

Camille: [Regarding Bond] There is something horribly efficient about you.

Quantum of Solace is the second installment of the current series of Bond films. Following an amazing twenty first installment of the Bond in Casino Royale, this film, to be very honest is quite the let down. Daniel Craig was still great as Bond - as usual - and Much like Casino Royale, the film had it's cool chase scenes, action packed moments, crazy stunts, and defying escapes that have come to be famous for Bond movies.

However, where Quantum of Solace loses it's edge is in the story telling. Casino Royal had an amazing plot that help drive all of the other wonderful elements that make it a great film (Second film to receive a perfect DP score). This film, however, while it does a nice job of continuing the story that is Bond and his lost love from the first film, offered very little intrigue. The plot was subpar and very blande, espeically when compared to Le Chiffre, who makes for an excellent villain.

QOS  does very little to capture the viewer the way CR simply engulfed you. In fact, at times, I was clock watching, which is never a good sign for a film.

Also, how obvious is the product placement of Ford Motors throughout the film? A Ford Edge in Haiti? I don't think so.

All in all, Quantum of Solace is still a decent film. Just don't expect another Casino Royale.