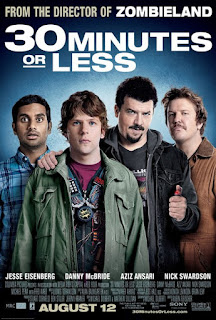 Two start-up criminals strap a bomb to a pizza delivery guy and inform him he must rob a bank or else...

After getting masks and fake toy guns, Nick and Chet rob a neighborhood friend's father for his car, and then rob the bank. Both situations filled with amateur and uncomfortable moves by both.

Chet: [gasp as Nick shows the bomb vest] Is that thing real?
Nick: Chet, if I don't get to the money in time. This thing gonna blow.
Chet: [angry] And your first though was to come to a school, filled with young children?
---

30 Minutes or Less is a pretty entertaining film. Boasting a pretty good lead with Jesse Eisenberg in the lead role along tremendously funny guys like Aziz Ansari and Nick Swardson, the film is very funny. With many silly situations and awkward lines, 30 seconds or less will have you laughing from beginning to the end. Especially since it is only 84 minutes long.

While the plot does develop really nicely with all of the characters being invested, the film is very predictable  and isn't of much depth. However, it's good at what it was meant to do, and that is make you laugh.

A recommendation for those in need of a laugh. Not great, but overall, decent.