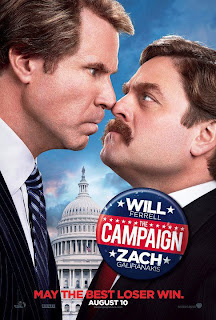 After a complacent and non-progressive congressman is finally challenged by a local tourism director, both campaigns go through changes as both men not only try to win the candidacy, but not get corrupt from large businessmen looking to change the district.

After a debate in which Huggins schockingly gets the best of Brady again, Brady takes a swing at Huggins and misses, and ends up punching a baby.

The Campaign is the perfect movie to view during an election year such as this one. The film takes every aspect of politics, dials it up to highest level of silliness  and completely lets the ridiculousness of politics come through. It may be a bit silly, but when it is parallel with the current real election occuring, the film is great fun.

Ferrell and Galifiankis are insanely hilarious as you can imagine. Ferrell's portrayal of the character Cam Brady was perfect as it wasn't as over-the-top, but just right. Think the political version of Ron Burgandy from Anchorman. And Galifiniankis, well, as always, every random thing he does in this movie is just priceless.

The film isn't a quality film by any means, but it is decent enough to to check out with some time to kill.