Knicks and Nets Should Be Fun For Years To Come 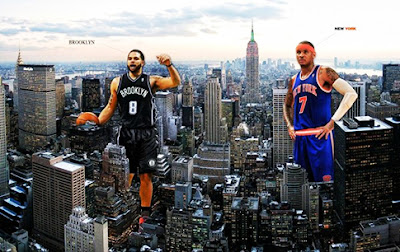 I can't lie. I had this game circled on my calendar for a few months now, and so did many other Knicks fans...and I guess Nets fans as well. After the long awaited changes such as the move from the Meadowlands to my backyard of Brooklyn, the unveiling of their brand-spanking new building on Flatbush and Atlantic, the changing of the colors, the spending of millions of dollars on new players, and the enormous endorsement and hype from Jay-Z, Knicks fans watched as the spotlight that would've been theirs after years of heartache and misery, was now being taken away.


They are the Nets. While different in look, feel, and building, they are the Nets! The annoying second team that made it's home in the area. The team that we envied during their two Finals run that embarrassed us, but is barely memorable. After all, if an NBA Finals game happens, and no one goes, does it really happen?

Nonetheless, this time, it's different. The Nets are cool. They are fresh. They are hip. And let's be honest, they are pretty damn impressive on the court.

Us Knicks fans. We hate this. We won't admit it, but we hate it. We hate the fraudbag fans that suddenly jumped ship. We hate their awesome new arena (which really is a beautiful place), and we hate the attention they have garnered.

So yes, even though unfortunate circumstances delayed the first encounter, it added to the build and hype that much more.

Last night was electric. It was amazing. In fact, the entire day was. Walking around the city and seeing those either wearing their black and white or their orange and blue reminded me of the 2000 Subway World Series. The game was highly talked about, discussed on sports radio, and as expected, was the big ticket in town.

It did not disappoint with a ruckus split crowd that many on Twitter compared to in-state rivalry college game atmospheres. I don't believe I've ever seen a game where you heard chants of "de-fense!" on BOTH ends of the floor.

With a playoff like pace, we saw an epic game with the rise of superstars (Carmelo Anthony and Deron Williams), the struggles of other players (Raymond Felton and Joe Johnson), the great play of both side's big men (Tyson Chandler and Brook Lopez), and the various story lines that surrounded the game.

As a Knicks fan, it hurt to see the Nets take game one of what is now a rivalry. And while the Knicks organization or it's fans don't want to admit it (even myself), this is indeed a rivalry. This was more than just the 13th game of the NBA campaign for both teams.

Heck! This loss stings a bit. Much more than any regular season loss usually does.

I'm still bummed about the Knicks inability to hold on to the lead and maintain control of the game with under two minutes to play in the fourth quarter. It still grinds at me that Carmelo missed a potential game winner. I have similar feelings and flashbacks to John Starks' 1994 Finals performance when I think about my main guy, Raymond Felton's 3-19 shooting.

So yes, this game was different. Look no further than the decisive difference in body language afterwards that is rarely seen during the NBA regular season. The Nets skipping around on their home floor. The Knicks sulking and gazing at the Nets celebration. Coach Mike Woodson's sauntered whisper in the post game conference. Deron Williams' post game interview emitting the kid of joy and relief one should have reserved for June.

And we have three more games this season.

In the words of Bart Scott...Can't wait!

Knicks-Nets has arrived. It's now here with Yankees-Mets. And for those that think Yankees-Mets doesn't matter or is watered down, they do not have their pulse on this city.

Though, it's still early - one game early. However, last night had the type of intensity everyone wants to be a part of. It's the type of energy that will eventually help both teams recruit free agents. We've heard many players sign with the Yankees, Red Sox, Giants, Dodgers etc. and have listed being a part of those games as a reason (behind the money, of course). These are the kind of games everyone - anyone - would want to be a part of.

And I don't even want to get into the prospect of what it would be like if these two franchises met in the playoffs.

However, with one game in, the prospectus, the potential, and the excitement is there.

With a generation now coming up as Brooklyn Nets fans, and an old loyal guard staying true to the orange and blue, this is going to be ALOT of fun in the future.

A whole heckuva lot of fun.