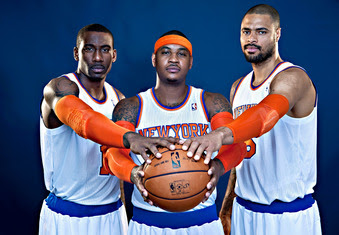 This annual post is a bit late due to the events of Hurricane (or Super Storm?) Sandy, and my thoughts and posts being consumed with the recent events. However, tradition is tradition, and here we are taking a look at the keys for the New York Knicks and their upcoming 2012-2013 NBA Season. With a full season to tackle, a chance at a normal training-camp, and the addition of several free-agents, and yes, dealing with that sudden increase in average-age, the Knicks have a chance to really do some special this year. I know I said that last year, and it was true, but last year's Knicks campaign was one of the weirdest I've ever experienced.

But this is the year, right?!

1. Carmelo Anthony - The sole reason for any New York Knicks success will rely on what, which, and who Carmelo Anthony is this upcoming season. New Yorkers and Knicks fans were not fooled by the superstar we received that was clearly talented, but was more interested in scoring 30 and being comfortable rather than finishing the game with a win. That Carmelo Anthony was all about isolation plays for himself and putting up a satisfying number of shots per game.

However, after seeing the super friends and fellow draft class members on the Miami Heat win a ring, the focus was no longer on LeBron's chase for a ring. The focus is now on the man that has been eilimated in the first round in eight of his nine season in the NBA.

The Knicks team starts and ends with Melo.

Will he keep it up?

2. Health - Let's be honest, the Knicks continued to be the focus of jokes with their recent acquisitions of Jason Kidd, Kurt Thomas, Marcus Camby, and Rasheed Wallace. Yes, if this were 2005, that would be a pretty impressive starting lineup. However, that is the Knicks bench, and the added age...err experience, could be a very big factor in helping the Knicks stay the course over a long season, and also come April.

However, as we know, with age comes injuries. And with injured old players, comes long healing periods.

The Knicks are going to have to weather these situations throughout the year, and hopefully keep the injuries to a minimum.

3. De-fense! bum-bum De-fense! - Defense wins games, and Coach Mike Woodson has already improved the team in this area. Will they buy in for the course of a season remains to be seen.

And if they do, imagine how much better they will become once Iman Shumpert returns.

4. Will Everyone Love Raymond? - There is no question I am a big fan of Raymond Felton. I was sad to see him go the first time, but ultimately understood why. Now back for round two, Felton is going to be the x-factor and the engine to this sports car in helping the Knicks become an elite team. This team has lacked great point guard play since Felton's departure, sans a brief period here in New York known as Linsanity. It will be up to Felton to orchestrate the offense to keep the attack balanced, and to pressure the ball on the other side.

Having the wisdom of Jason Kidd to help doesn't hurt either.

5. Stoudemire's Role - The huge 800lb gorilla in the room is what do you do with Amar'e Stoudemire when he returns? Obviously he's a player talented enough to help. However, do you force Stoudemire back into the starting lineup to appease his ego and raise those questions of Melo-STAT chemistry, or are they able to get him to do what could possibly make the Knicks a very dangerous team by having him come off the bench? Can you imagine Stoudemire on the 2nd rotation with Pablo Prigioni, Rasheed Wallace, Marcus Camby, J.R. Smith, and Steve Novak against other 2nd rotations?

Not many teams have a star coming off the bench, and this could make the Knicks the deepest team in the league.

Only time will tell.