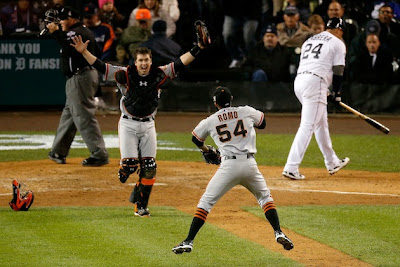 Another champion, and another great season that was the 2012 Major League Baseball season. The 2012 campaign was a truly memorable one that saw baseball take yet another step towards the fruits of a strong revenue sharing system that has improved the parity around the league. The season saw many great stories in the Baltimore Orioles and the Oakland Athletics, who weren't predicted to have a winning season by anyone outside of their organizations. There was, of course, the rise to competitiveness that was the Washington Nationals, those that utterly failed in the Los Angeles Dodgers, Los Angeles Angels of Anaheim, the Boston Red Sox, and to some extent, the Miami Marlins. And of course, there were the storylines that swirled around the usual suspects such as the New York Yankees, Detroit Tigers, and St. Louis Cardinals. And let's not forget the inclusion of the Wilcard one-and-done round which added so much intrigue this year!

However, the biggest story of all was that of the San Francisco Giants who not only overcame the loss Brian Wilson, their closer, the huge struggles of their number two pitcher in Tim Lincecum, or the sudden fat wallets the rival Los Angeles Dodgers, but dealt with coming back from an 0-2 deficit in the NLDS to defeat the Reds, then a 1-3 deficit in the NLCS to defeat those pesky Cardinals, and finally sweeping the favorite Tigers to win their second World Series title in the last three years. A remarkable season for the Giants, and overall, a very, very good one. As is tradition, here are some other tidbits I'll remember from the 2012 MLB season.