Red Bulls Serve Up Another Heartbreaker 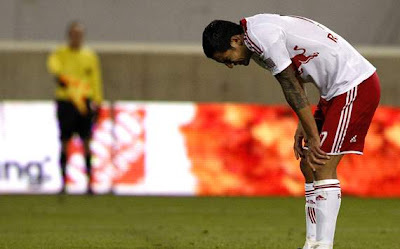 It was a tough loss to swallow.

Last night's Red Bulls loss in the Eastern Conference Semi-Finals was the kind of loss that not only exemplified the franchise's long chase for its first MLS Cup, but that typical let down we often get from New York professional teams.

There were so many opportunities, and so many second chances for the Red Bulls to be advancing on to play the Houston Dynamo, but it just didn't seem to be.

The Red Bulls missed eighteen - count em! - eighteen shots on goal in the 1-0 loss to the rival DC United. We also saw Rafa Marquez put the icing on the cake on what has been a terrible marriage between him and the Red Bulls with two yellow cards. The second card simply being one sheer laziness.

Chris Pontius, who suffered the ill-infraction slide from Marquez confirmed the efforts when he stated,  "It was like he was trying to get thrown out of the game. Like he didn't want to be there."

Which is a shame since Marquez has played really well down the stretch.

And of course there was the controversial play of the night with Thierry Henry's encroachment on Kenny Cooper's penalty kick. We all know Kenny Cooper stutter-steps on all of his PK's, and Henry is aware of this as well. However, on this night, at this very moment, Henry decided to run ahead, breaking the plain, and caused a do-over on the made goal.

And yes, on the do-over second attempt, Cooper missed his first ever penalty kick.

And lastly, after surrendering an awful goal in which the last defenders seemed still in shock of the penalty kick situation, Nick DeLeon, the talented DC United rookie, put DC up 1-0.

And with one last chance on a free kick thirty yards from the goal, the moment set, and the crowd up, Roy Miller - yes, Roy Miller! - takes the kick over Thierry Henry. Yes, you definitely read that right. And yes, that was Miller's first free kick attempt in his career.

How Henry isn't the one taking that shot is mind boggling. Even more annoying is the fact that Henry passed up the opportunity to be the guy. The guy the Red Bulls are paying him big bucks to be.

After the final whistle blew signaling the end of what could have been a promising Red Bulls playoff run, players stood stunned and dejected on the field. Some with their hands on their knees staring into the ground,  others hands on their hips staring into the sky, and if your passionate like one of my favorites in Kenny Cooper, you exit the field before your raw emotion  of tears is apparent to all.

It was a tough loss to end what was such a great and memorable season. With changes already being made like manager Hans Backe not returning, the off-season will be long and cold, and filled with more decisions to make another chase for the franchise's first MLS cup.