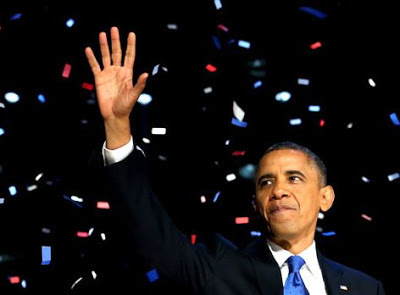 Four more years was the result of what was the culmination of a very, very interesting Presidential election. Dating back to the Republican primaries and caucuses, all the way through last night, all of it has been an absolute whirlwind. One full of emotion, information, frustration, lying, flip-flopping, cover-ups, dust-ups, and even annoyance. After last night, we can all agree, regardless of who you punched a ballot for last night, we were ready for a decision to be made so the campaigning can stop, and the real work of restoring our country can begin. And that's a message we all can approve!

With President Obama still at the helm of leadership for our nation, hopefully, the excitement and movement he gained from many demographic groups in his two election wins can continue. And hopefully, that can eventually inspire those who punched their ballots elsewhere last night to bring that same spirit to balance the spectrum. As the President stated in his speech, the work is not done, but has just begun. With the house of representatives being controlled by Republicans, "reaching across the aisle" will no longer be a catchy slogan that sounds nice in theory, but one that must be practiced for a productive and progressive next four years.


And in my opinion, this was the best outcome for this nation as I believe no party is correct outright. A blend of both is truly what gets things done.

And speaking of President Obama, it was nice to see the excitement of those that voted for him when he captured that magical number of 270 electoral votes. And yes, I too was a part of that as I ticketed the President for a second term, much like I did President Bush in 2004. In both occasions, I believed the President was the more qualified choice and would like to see him finish what he started four years ago.

However, we all have to be honest in our review - President Obama has to be a better President than he was in his first four years. There is no ifs, ands, or buts about it. He wasn't great in his first term, and is very lucky the candidate he was running against wasn't a stronger candidate than Governor Mitt Romney. The President is getting a second chance to be the President he was supposed to be.

On the other hand, Governor Romney's election results are a clear indication of what the GOP is becoming in America - a party of white middle-aged Americans viewed as right-wing extremists. While the current Democratic side of things has evolved over the past twenty years into a party of diversity, youth, and of pro-action, it seems the GOP is becoming that old, tired, stale party that simply cannot connect with the change in America. And that's alarming.

Was that the reason we saw Romney flip-flop on various social issues down the stretch that were core republican ideals such as abortion, same-sex marriage, contraception, and government involvement? Maybe. Possibly. Or it could be Romney just didn't know himself? Who knows?

I personally believe this country can benefit from some of the GOP's governing philosophy and ideals.

However, after a tough loss, the GOP must regroup for 2016, and must do so in a way that can present themselves to the American people as something other than rich people who are stuck in their ways, and the very old thinking.

Heck, maybe we continue to see the growing split of the party into what seems to be developing as traditional Republicans and newly named conservatives.

And let's not forget the growing radical Tea Party and how they mix into all of this.

Quite frankly, in a country with election results that were so frightening in its split of red and blue, it's imperative to not only find ways to get along, but absolutely necessary to balance one another in order to successfully build a better future and nation for us all.

For whether we believe it or not, an all Democratic thinking is not good for this country, and neither is an all Republican way.

This election proved that while we are split hard and heavy, one side needs the other just as much as they needed their candidate in the White House.

And that is the first admission in doing what is truly best for these United States of America.