138 Points! And a Range of Emotions 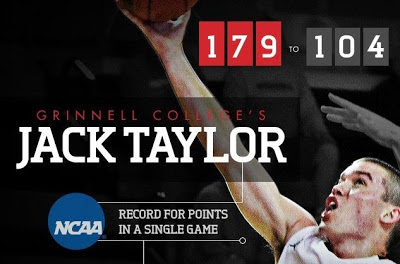 I was at work when one of my student aids said to me, "some kid just scored 138 points tonight!"

Thinking that college teams don't ever score 138 points in a game, this kid might be seeing things. Was it 38?

"No, one hundred and thirty eight points!"

After checking my phone for the story and eventually twitter for the updates, it was indeed true. Jack Taylor of Grinnell College scored 138 points, leading his team to a 179-104 victory.

Initially, I'm sure just like you, I too had fun with the recent history breaking achievement that still seemed too good to be true in the immediate moments.

"The Washington Wizards sure could use Jack Taylor!"

"...So happens that I actually benched Jack Taylor tonight in my DIII fantasy basketball league"

"Mike D'Antoni would love this kid!"

But after really digesting the story, the coverage, and the responses it received last night, I was left from a state of shock, into being impressed, to confused, to almost disgusted by the feat.

First, the feat is very impressive. Basketball fans always laud over the night Wilt Chamberlain scored 100 points and the famous picture of him after the game to prove it since there is no video of the achievement. And it wasn't too long ago we saw Kobe Bryant go off for 81 against the Raptors which too, was highly impressive. 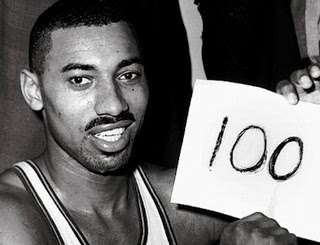 But c'mon, man! ONE HUNDRED AND THIRTY EIGHT POINTS!

In college basketball, nonetheless. A platform with a 35 second shot clock and usual scores that barely break 80.

It's a task that I couldn't even accomplish in a video game while using a created player with perfect attributes of 99.

However, after weighing it's difficulty, I'm thoroughly confused on the achievement. When there are so many factors going against this happening, it seems really far fetched that it can indeed occur under normal circumstances. From various reports, Grinnell''s coach, David Arseneault, apparently uses a unique system of interchanging lines of five in which all encouraged to shoot the ball every 12 seconds. Yes, twelve seconds! All members of the team are sharpshooters, the only type of player Grinnell recruits. In fact, under Arseneault, Grinnell has led the nation in scoring in 17 of the last 19 seasons.

So maybe it isn't all too crazy in such an insane, high octane offense, that a player can have "one of those nights" and fill the bucket for 138. But 138 points still sounds crazy. Absurd, really. Too absurd.

What's even crazier is the final score of 179-104, a testament that the word defense wasn't even whispered in either team's locker room  Faith Baptist Bible, Grinnell's opponent, had a member score 70. Imagine dropping 70 and still not be the top scorer?

Now granted, from the video posted on the Grinnell College Athletics website lauding the historic night with a must-see box score and a video clip, some of Taylor's shots were indeed incredible.

However, wouldn't you think after he got a hot hand and filled in - oh, I don't know, 40? - as a coach you'd make adjustments to double, triple, or even send everyone including your cheerleaders at the kid to force someone else to score?

And this is where I eventually sway into being disgusted. If you haven't taken a look at the box score, please do so. Taylor hoisted 108 shots!

Where is the team play? I'm sure not all of those buckets were easy, and someone had to be open for an easier bucket.

Heck, at some point didn't his elbow give out?

And once again, I'm sure Arseneault has his unique system, but at one point is this acceptable?

I could even take one step into pure cynicism and claim that this was all a publicity stunt to make Sports Center, trend on Twitter, fill the Associated Press, and garner pub for the school.

In no way am I attempting to rain on Taylor's parade. However there seems to be some sort of basketball crime committed in this one. Some type of ethical hoops infraction that ultimately ruins the integrity of the game.

Especially for a sport that embraces individuality, but tries to walk that line of projecting team as the message.

After punching the keys on this one, I'm still ranging through the emotions.

I'm cynical. I hate what it represents for the game of basketball. I question the defense and coaching of the game, and yes, I even joke about it.

All just to comeback around to the fact...this kid scored 138 points!