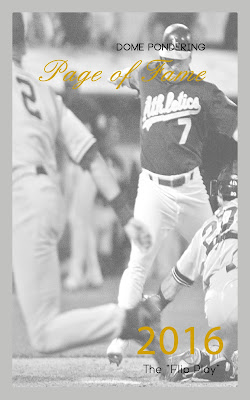 I laid there, nervous, hoping the Yankees could somehow hold on and squeak out a win over the Oakland Athletics to keep the season alive. Then it happened. Terrence Long ripped a liner down the right field line. Shane Spencer, in all of his instant-glory, over threw both Alfonso Soriano and Tino Martinez. Here came Jeremy Giambi, carrying the weight of being Jason's brother in a rage in which he moved around the bases. Then suddenly, like a Super Hero, Derek Jeter comes out of no where, probably with his cape flailing from around his neck, picks up the errant throw, shovels it to a waiting Jorge Posada, tagging Giambi for the out


I leaped out from out under my blanket, and jumped up and down on my bed. It was literally the greatest play I've ever seen. And it still is. Not the most athletic. Not the most impactful. Not the most impressive. But when it came to the moment, in the feel of the classic Jetarian feel of everything he did, this play just had that intangible feeling.

I'll never forget it. Ever.