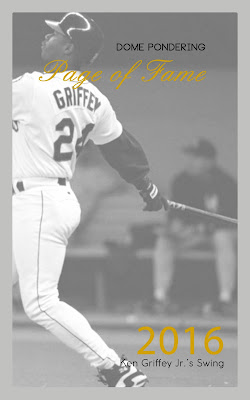 Let's be honest, Ken Griffey Jr. was the man. He was THAT guy for baseball. And in my opinion, a guy in which they have not been able to replace since he abdicated the throne. I was  huge fan of Griffey, but his swing is what REALLY made him special.

Man, that swing! It was all sorts of perfect. The unique waggle in the stance right before that long compact swing that chopped through the zone. Every bit of contact made you think, no, made you believe the ball was going out of the park. And when it did, it went pretty far.


And let's not forget the post-swing, which had that quick turn, and sudden stop, into that patent walk that had so much swagger. Griff was the absolute man. And that swing is Page of Fame worthy. Who hasn't emulated it at least once in their lifetime?

Griffey will go into the MLB Hall of Fame in 2016. But his swing is worthy of just that as well.