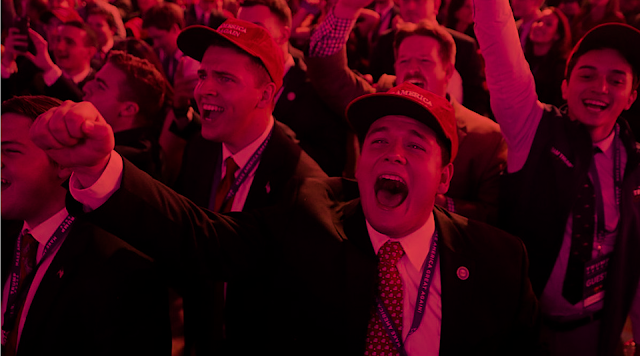 So today was interesting, huh? Waking up this morning to the official announcement that President-elect Donald Trump was indeed a reality was jarring. And while the nation made their change, here in New York City, the entire day was quite somber - like, really somber. A classic blue area, many had that same look of disbelief on their faces on the subways and on the streets of the city. It was a classic common thread and talking point for most strangers throughout the day. "I don't know" and the shaking of the head were seen quite frequently.

So, who did I vote for? I know I promised (as always) to reveal that, and my answer was indeed Hillary Clinton. Why? Quite frankly, I didn't love Clinton, but I found her to be the lesser of the two evils. Trump just never provided any concrete plans for me to find solace in, and if I'm being completely honest with all of you, I find him to be the epitome of white privilege and ideals in America. Just my take, as I'm sure you've heard everyone else's over the past twenty-four hours.


Clinton marks the first Presidential vote I've made for a losing candidate. In previous years, it's been Bush twice, and Obama twice. If you're confused on that, just check out some previous posts on my political stances.

Regardless, here are some of my quick thoughts and feelings on the election:

- Despite my vote, I'm not mad. Really, I'm not. My biggest overall takeaway from this is that those who have had such xenophobic and oppressive-laden thoughts over the years and couldn't express that, now have a platform to do so. It's trendy and acceptable to have such ideologies. That part is scary. However, it's not new. America has always had these thoughts, it's now enforced and validated.

- I've always rolled my eyes at the phrase, "Make America Great Again". My immediate response is always, "who was America ever great for?" Certainly not me, and others like me. This nation has never been great for anyone that is underrepresented. As I've stated in a post regarding the Terence Crutcher shooting, I've always had a complex affinity for this country. This election affirms this feeling. And I'm sure many others feel this way as well.

- Yes, I do believe race and socioeconomics played a huge part in this election. Keeping it short, this was all about "whitelash", as Van Jones epically stated in his take on the election. Again, being completely honest, I like talking politics with those willing to be vulnerable, engaging, and understanding for thoughtful rhetoric. Yet, with all of the people I've discussed this election season with, I haven't met a disclosed Trump voter who wasn't white, and who wasn't from an area that was homogenous.

Of course, I know not all Trump supporters (I really do dislike this term, and how it carries such negative connotation - it's unfair to Trump) are white, but I'm just saying, the ones I've met, or know of, are. And very few of them live near, are closely connected to, or even understand the lives of those those they are making sweeping claims about - mainly immigrants, minorities, and muslims. They have very little idea, or they think they do, on social justice issues.

It's baffling to me when certain individuals make claims on other communities without having been a part of it or experiencing it (even by second hand) just a bit. For me, it's don't tell me about Chicago, or inner cities when you haven't been there, talked to people from there, or even interact to engage in those communities. Just don't. Too often, I underestimate white privilege in our country. I do. I give too much rope on this until it pops up and is utterly blatant. It's there. Always is. Just bloggin', just being completely real.

- I attempted to have my students, who were outraged over the decision, engage in thoughtful and articulate dialogue today. I wanted to make sure they understood what just happened, and what is important to look at is not that YOUR candidate didn't win, but that the country elected this outcome. The people of America DO want change, and that is to be understood, respected, honored, an applauded. And I really do respect the voice that was very clearly heard last night. Most of America is tired of politics being run the way it is, and I can't blame them for having that feeling and for using that voice. Kudos to those who used their vote for the change we will eventually see.

- Speaking of, where were those nearly nine million people who voted in 2012, and were absent in this election? How about the eleven thousand votes Harambe - YES, the deceased gorilla - received as write-ins? These people annoy me. It bothers me like no other when some forfeit their vote for nothing other than either sheer laziness, or some ridiculous reasoning. Talk about a taking the right to vote for granted.

Following up on that is the large turnout of "uneducated white men" for Trump. The term should really - ALWAYS - be "non-college educated", but whatevs. It's a nice play by Trump catering to their needs. But I shutter to think of the message these voters received (and not what was necessarily sent). When one of my student-assistants walked by the Trump Hotel here in NYC and was told last night to "enjoy your time before we send you back and build that wall, you Mexican bitch", I fear for the kind of political activation that is in motion, and what is yet to come.

- I genuinely feel for immigrants in this country right now. I can't even imagine the thoughts, feelings, and anxiety they are dealing with.

- Women, or at least those who supported the Clinton campaign or drove the anti-Trump bus, I cannot begin to imagine how you must feel today. It's a blow, and a big step back in the overall diversity we need as a country. My heart especially goes out to those who have to explain this situation to their daughters. It's a tough and delicate issue. But again, the majority of our country wants this. Maybe we aren't as far along on women's issues as we thought.

- And finally, it is absolutely imperative for our country to come together after this incredibly divisive election. But, I just don't see this happening quickly, nor do I see it happening easily. This was ugly, and has longstanding and deep rooted ramifications, not to mention, some deeper enlightenment on issues for many on all sides of this election.

My hope? All the best to President-elect Donald Trump. It doesn't do us any favors to see him fail. Maybe there is something to the whole #draintheswamp ideal. We'll see. 2016 has been exhausting. And this is all JUST beginning. Ugh. 2017 will be very, very interesting.