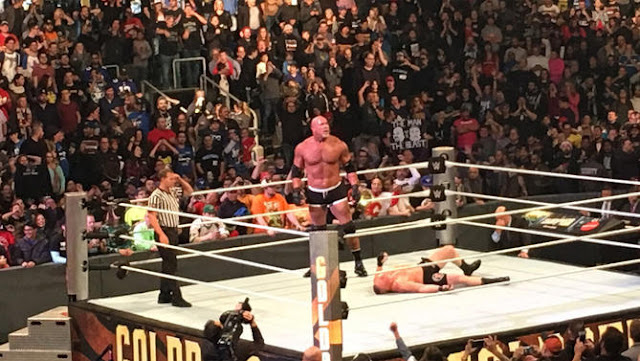 I loved the finish to Brock Lesnar vs. Goldberg. I loved everything about it. Sure, cue up those who want to play armchair booker rather than just allow themselves to enjoy the moment, regardless, it was the kind of moment only the WWE does best in pro wrestling.

So why did I love it? Simple. It was unpredictable. In a world where pro wrestling has multiple spoilers, breaking news, and various stories which hurt the surprise factor it once had, I genuinely miss that jaw drop moment. This match was one of them.

Another reason I loved it is because of how unconventional it was. I am a huge fan of the attempts to promote and present pro wrestling in a different way. Have matches end quick in a rush like that is reminiscent of the adrenaline-style viewing you get from sports, specifically the UFC. Anything can happen in a moment. I've grown to despise how only matches that play along a certain formula that incorporate a few false finishes, including a couple involving finishers, are considered the "great matches". I think the art form has moved beyond this. Just me, just my preference.


What about Brock's loss, you may ponder? I understand the concerns of a quick and abrupt loss to Brock. Especially, when you factor in he just lost to a 50-year old who hasn't wrestled in over twelve years. I get it. But I am VERY intrigued in what is to come for Lesnar. This takes him to another level, another side, and I'm eagerly anticipating it. After all, Wrestlemania season is on the horizon.

Nonetheless, the WWE has the wrestling world buzzing. And quite frankly, they deserve the attention. The product has been entertaining again, and of course, they have many different pieces in play that are interesting - including Brock Lesnar vs. Bill Goldberg III.

Think Stone Cold may want redemption as well from his part in that Wrestlemania XX match?

NXT continues to blow me away. Quite frankly, I find the product to be overrated among many wrestling fans. Sometimes, it feels like some want an "alternative" (looking right at you, TNA) so badly, they attempt to believe that this is it. Sorry, it's not.

However, NXT's specials are absolutely awesome. The talent they once had isn't quite there, but you know what has become such an underlying strength for the brand - it's connection to fans. Again, this isn't because of in-ring work, but it's ability to get over catch phrases and of course, deliver interesting entrances and scenarios that help propel these talents in the eyes of the fan base.

I've always been a fan of Bobby Roode. Anyone who read my Pondering with Plumtree columns at TNAsylum knows this. Yet, he never felt as big of a star as he did with that entrance this past Saturday night. Glorious!!! The song, the robe, the mannerisms, the whole entire ordeal was yes, glorious!

Also, little things like the group of violin players for Nakamura's entrance was also awesome.

Plus, for me, it seems Triple H continues to add some really old school elements into the NXT brand which I very much enjoy such as Ellering hanging above the ring, strong tag team matches, and yes, slow storytelling.

By the way, The Revival vs. DIY might just be my favorite match of the year. No, really. Such good stuff.

After publicly denouncing a once-strong fandom for TNA (Gone! My special Fandom for TNA), I've still continued to watch the product. As said that post, I'm just sick of the leadership and management of the company. This is the third year in a row TNA has closed the calendar year with controversy surrounding management of some sorts, and their product - and the general aura of the company - feels flat because of it.

So yeah, expect another rebrand/reboot/whatever to begin 2017.

For me, Matt Hardy and Bobbly Lashley have been tremendous for their outstanding 2016 product. Yet, what really bothers me, especially in comparison to the WWE machine, is simply the unorganization of several things. Obviously, there is a big difference in budget, but for instance, what the heck is Team X Gold? Are they ever going to explain it? What are the big shows? Whats the point of One Night Only PPVs? Argh! I'm frustrated just thinking about it.

Back to the bright side again, they have a concept that can really help brand and diversify their product with the Grand Championship (though, not crazy about the look of the belt or it's name). I know they're trying to build a storyline around it right now with Aaron Rex (Also not a fan of him since arriving in TNA), but the actual tournament now seems like it was more fun than the existence of the championship. I'm not giving up on it, but yes, I'm now waning on the idea a tad.

Finally, I'll close on this note - for me personally, with the social climate being what it is today post-election, and of course everything else that has been 2016 (deaths, social justice concerns, etc...), it's things like pro wrestling that continue to bring joy, and take me away from reality.

Let's not forget that when we look to dissect everything. Enjoy it.

Even within some discussions, wrestling allows silver lines such as the fact that we have a President who is a WWE Hall of Famer, and one who definitely has a better tweener reaction than John Cena himself. Fact is far stranger than fiction.

Nonetheless, pro wrestling is fantastic. I thank the good Lord for it.