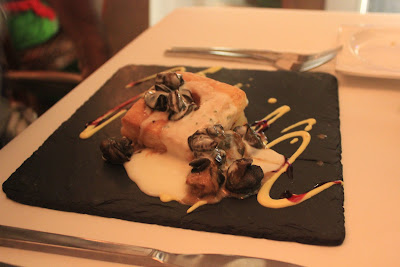 Another year, another opportunity to jump out on the limb to try new things. As the year nears to a close, my recent vacation was just the right opportunity to branch out in my food palette and try a food that I have never had before.

Last year, I delved into octopus, as I chewed, and chewed (and chewed!) my way to accomplishing the task. This year, I went with a more common food. A food that is actually considered to be an upper class dish. Yes, this past week on vacation in the Bahamas, the head DP'er himself ate snails. And for those of you who prefer to go by fancy names, that would be escargot.


Now much like last year, the tag team partner and I were vacationing at an all-inclusive resort, so such experimentation is no-risk, and all reward. Eating at a fancy French restaurant, I decided to order the little critters for my appetizer.

If you ever had escargot, you might be thinking, what's the big deal? Well, while playing basketball the night before, I came upon a snail on the court. How it got there? No idea. Therefore the concept and visual was still very fresh in my mind. A very vivid reminder of what snails were and looked like. A rare sight for a Brooklyn kid.

Therefore, the constant thought of eating what I saw the night before completely weirded me out. However, I was intent on manning up.

As the plate of creatures were finally delivered, it was very obvious that they were indeed snails. However, as is the case with fancy, dancy French dining, they were placed around a croissant and some sweet chocolate syrup for aesthetic purposes, or  in my mind, to simply dress up the idea you were about to eat snails.

As the tag team partner looked on intentively, I decided to hold my stomach as much as I could, think about anything other than the fact I was about to eat snails, and quickly snagged the cooked bugger off my fork.

Seriously, not bad at all.

Actually, it's quite, ummmm, good?

It was very tasty until the mind tricks came back to remind you about the snail thing.

The texture can be compared to shrimp or lobster tail, and it has a very distinct taste that is difficult to put into words.

Unlike my octopus experience last year, escargot was easy to chew and much easier get down. In fact, of the twelve placed on my plate, I had about eight until I decided to quit while I was ahead.

Yes, that you-just-ate-snails thought pops into your head every now and then.

It's quite mentally fatiguing to eat escargot to say the least.

Otherwise, I'd say give it a try. It's not bad if you can muster up the courage.

It's worth the try...and at the least, a bucket list endeavor.