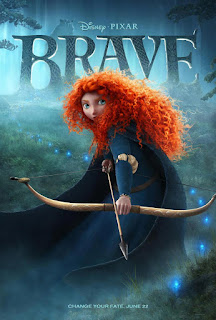 A princess defies a normal custom and brings chaos to her Kingdom. After a wish gone wrong, she must now rely on her bravery and her archery skills to reverse the curse before it becomes permanent at sunrise.

After being turned into a bear, Queen Elinor tries to maintain her queen-like characteristics within the body of a bear.

"There are those who say fate is something beyond our command. That destiny is not our own, but I know better. Our fate lives within us, you only have to be brave enough to see it. "

Brave is yet another solid animation from Pixar. It amazes me how well-written and meaningful much of these films usually are in comparison to normal films. Brave is no exception. With an interesting twist on the typical fairy-tale royal characters, this viking kingdom is filled with Scottish accents, quirky characters, and of course, a wonderful lesson that everyone of all ages can appreciate.

Brave is not on the level of Cars or Toy Story, but it is a solid film without any major flaws that will thoroughly entertain.