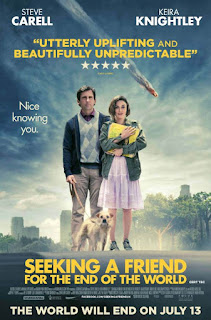 With an asteroid set to hit earth resulting in the world's demise, the sudden departure of his wife causes him to seek out his high school sweetheart on a road trip with his neighbor, who is also looking for her family. The trip leads to an unexpected find.

After being pulled over for speeding, Penny gives Dodge her joint to hide from the police officer. She tells him on the whim to put it in his mouth and Dodge puts the entire thing in his mouth as the officer comes to the window.

Seeking a Friend For the End of the World is a movie that gives you a variety of aspects to make it a really unique view. The film offers comedic relief, a life moral, and a bit of romance and uses the end of the world to get the message across that it is never too late to find love. Seeking a Friend delivers a new twist on the dark and gloomy prospect on the extinction of the world. Dodge and Penny played by Carrell and Knightley, really present two character that are so different at first, but through their adventure in the end of times, they realize that one another are what they were looking for their entire lives.

Other appearances by Connie Britton, Patton Oswalt, Rob Corrdry, and a few others really add to an all-star cast in the beginning of the film, making for some really funny moments.

Overall, Seeking a Friend for the End of the World is an interesting movie that is worth the watch.