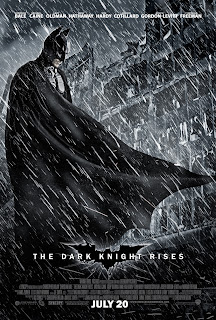 After eight years, Gotham is once again terrorized by a new villain, Bane, and the Dark Knight must comeback one more time to save the city that has now branded him as an enemy.

After lacing the city with explosives, Bane detonates them all during the kickoff of a football game.

Jim Gordon: Can I change your mind, about quitting the force?

John Blake: No. You remember what you said about structures becoming shackles? I know what you meant now, and I just can't take it. I mean, nobody will ever know who it was who saved an entire city.

Jim Gordon: They know who it was; it was the Batman.

What is there to say about The Dark Knight Rises that hasn't been already said? Really, what else can justify this trilogy by Christopher Nolan? TDKR is an awesome film that wraps up an amazing trilogy, and the greatest presentation of the super hero ever done. Nolan restored the character after a few years of it being degraded under other directors.

TDKR has a fantastic plot with many well-written angles that truly help place the Batman character in an underdog bind. The scenes are beautiful and the talent involved is top-notch. Especially, Joseph Gordon-Levitt, who in my opinion was great in establishing the early groundwork of Robin, if Nolan decides to go that route.

All in all, a must-see for all, especially those who are fans of the character and comic-book.