Sanchez Era Over With Debut of the Mac? 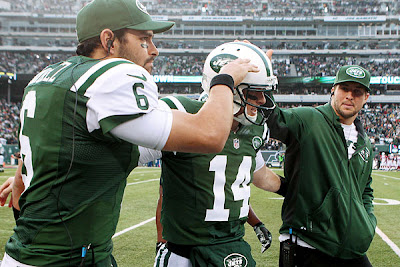 When you thought the New York Jets season couldn't get anymore controversial, we get this past Sunday's developments. Mark Sanchez benched. And his replacement, Greg McElroy, lead the Jets to a 7-6 win over the Arizona Cardinals.

I'm not hailing Greg McElroy as the savior, or heck, he might not even be the starting quarterback next week, however, the events have proven that the New York Jets are a mess, and that the organization will continue to produce more compelling stories than General Hospital.

As for Sanchez, the built in excuses are now beginning to fade away. In a league where rookie quarterbacks are now leading their teams with far less talent around them than he has, not that he has much talent either. Nonetheless, showing signs of being worth investing in for the future looks unlikely as Sanchez looks completely lost. He looks overmatched. He looks defeated. And let's be honest, he looks terrible.

For every great pass of promise he made on the run, there are many red zone interceptions. For every highlight of his playoff performance defeating the New England Patriots in Foxboro, there are numerous back-breaking fumbles. And for every argument to be made of him having two AFC title game appearances and four road playoff wins, there is the damning argument that he is part of the main problem.

Sanchez continues to be that enigmatic topic, similar to Alex Rodriguez, who continues to offer various opinions and outlooks.

As for Tebow, we all know his deal. The debate can go on, and on, and on, until he retires. And then the what if arguments would ensue.

McElroy may or may not be the future. Who knows at this point? Especially after only seven passes. My wager is on probably not.

However, the sight of Mark Sanchez holding a clipboard and Tim Tebow cuddled up in a jacket next to him on the sidelines as the once-forgotten quarterback led the team to victory, all but signifies the beginning of the end of the Sanchez era, and possibly the Tim Tebow stay here in New York as well.

Now there's a turn we all didn't see coming.