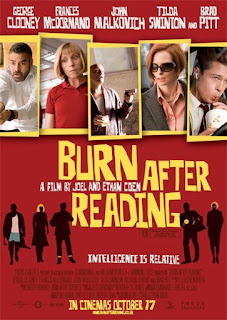 A disk containing the memoirs of a former CIA agent end up in the hands of two gym employees which spurs a series of events that affects several lives.

Chad and Linda finally call Osbourne to tell him of the found memoirs, and attempt to hint that they wanted a reward for the the discovery.

Burn After Reading is another movie from the Cohen brothers that is downright hilarious. And honestly, while it provides some satire about our government officials working in Washington D.C., the film is about absolutely nothing. Really - absolutely nothing. The film feels Seinfeld-esque with it's wacky characters, silly comments, hilarious remarks, and round-and-round plotted nature.

However, despite it's inability to provide a moving piece, Burn After Reading is worth every second of it's viewing because of it's characters. Clooney, McDormand, and Malkovich were all wonderful with their characters, however, Brad Pitt stole the movie in his portrayal of Chad Feldheimer. As a viewer you couldn't wait for Chad's next line, and quite honestly, everything about the character is hilarious.

Burn After Reading is the perfect remedy for mindless, simple, comedic entertainment.