It's Getting Late Early For A-Rod 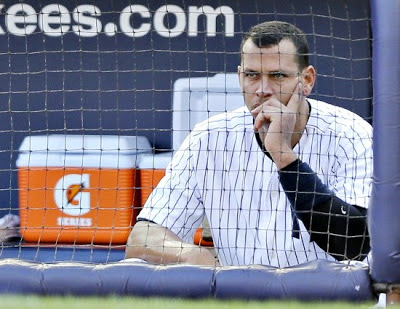 It's the gift that keeps on giving folks, and Alex Rodriguez simply seems poised to maintain his position as  the most controversial figure in sports. Forget budding topics like Tim Tebow, Mark Sanchez, and steroids/Hall of Fame talk in baseball, A-Rod is once again a hot topic. After an absolutely abysmal playoff performance, one in which he was not only benched, but paved the way for Raul Ibanez to make A-Rod's existence that much smaller, we now get the unfortunate news that he has a tear in his left hip which will require surgery.

It's an operation that is expected to keep him out four to six months. However, at thirty-seven, who knows if he can meet the expected recovery time.


The injury really is a double-edged sword as it offers a logical, and let's be honest Yankees fans, a huge exhale that A-Rod wasn't declining before our eyes as fast as we saw in the latter end of the summer months. Before his DL stint this past year, Rodriguez was still an above-average third baseman.

And whether this latest injury has any relation to prior steroid use is obviously up for discussion. Cynics and A-Rod haters will obviously tout their faux medical degrees and claim that is a direct reason. We know such tears are one of many, many effects prior steroid use can have on the body, but it really is hard to really make that claim a fact.

The topic is a viable one, and one that cannot be disputed either. A-Rod has only himself, and yes, his steroid-dealing cousin, Yuri, to blame for that.

Nonetheless, the injury itself produces much more than further A-Rod examination and discussion, but it really hinders the current and future state of the New York Yankees.

The Yankees now have four major holes to fill - third base, shortstop, right field, and catcher - among their needs in the bullpen and the bench. And we all know about the desire to be under the magic number of $189M by 2014. Therefore, the Yankees, who were handicapped before, now must make their already limited dollars go that much further to cover an already invested $29M.

Think about this. For the first time in almost eight years, the Yankees might be fielding two players on the left side of the infield not named Jeter and A-Rod, both who are dealing with major injuries.

And two players who are being paid a good chunk of green to do so.

For A-Rod, he was supposed to be the guy to outlast Jeter, donning pinstripes well into his forties. He was supposed to be the guy, as his contract bonuses indicates this year, who should begin descending on the planets bearing names of Mays, Ruth, Aaron, and Bonds. At this point, he should be wrapping up and winding down a glorious career as one of the best ever, and one of the greatest to wear the interlocking NY on his cap.

Remember when we thought A-Rod was a lock to be the eventual home run king? A sure 700 home run hitter? A potential first ballot Hall of Famer?

Instead, we're getting more doubt, and more gray areas in a discussion about a athlete in a time when his body of work should speak for itself.

After admitting steroid use, A-Rod told baseball fans to judge him on the next eight years, essentially looking to proving himself as being legit, and make others wrong about doubting him. So far, despite flashes of brilliance (can't deny 2009 World Series), and other moments of question, we've gotten the same thing we've always had - a murky and gray perception of what to think of Alex Rodriguez.

At thirty seven, and coming off of two hip surgeries in the past four years, the window to change this perception and prove us wrong is now so small, the odds are against him.

In the words of another Yankees great, Yogi Bera, "It's getting late early around here".

For A-Rod, and this latest set back, that might be the most definite thing said about him in a long time.