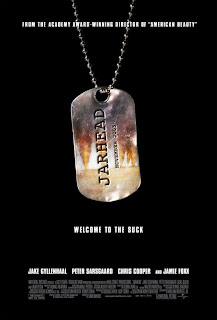 Based on the book written by former Marine, Anthony Swofford, which recounts his military experience in Saudi Arabia and Kuwait.

After finally getting a mission to take out the opposition, the two snipers get the clearance to pull the trigger up until the last minute when they are told to abort the mission. Troy then loses it inside the tower after all of the pressure and mental fatigue from the deployment.

"A story. A man fires a rifle for many years. and he goes to war. And afterwards he comes home, and he sees that whatever else he may do with his life - build a house, love a woman, change his son's diaper - he will always remain a jarhead. And all the jarheads killing and dying, they will always be me. We are still in the desert."

Jarhead is not your typical rah-rah war film with heroes, enemies, the overcoming-the-odds plot, and some tragedy thrown in. Ironically, Jarhead wraps all of those usual elements about war movies and gives them to you in the characters all on the same side.

Jarhead is a great film that gives a realistic look during combat times and allows the viewer in on authentic Marines life. Most of all, the film, based on real-life Anthony Swafford's memoirs, does a fantastic job of exposing and expounding on the internal hardships that marines go through in their deployment. Self-worth, sanity, relationships, and the usual causes of PTSD. All of it is touched on in Jarhead.

With a great book to base the film off, Jake Gyllenhall and Jamie Foxx really delivered spectacular performances in the film.

All in all, Jarhead is a highly regarded film that is more than just entertaining - it's highly enlightening.