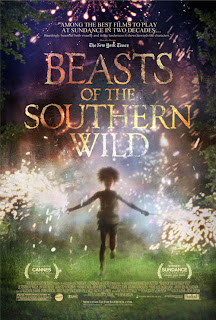 Dealing with her ailing, quick tempered father and her community being destroyed by the melting ice caps, Hushpuppy quickly learns how to deal with courage, love, and life.

After the metaphoric aurochs reach Hushpuppy, she turns around and faces them head on without any fear.

"When it all goes quiet behind my eyes, I see everything that made me flying around in invisible pieces."

"Sometimes you can break something so bad, that it can't get put back together."

One of those movies that is now on everyone's radar after the Golden Globes and the Oscars, Beast of the Southern Wild does not disappoint with a raw and emotional film. A plot which makes you think of those who are being affected by the warming earth, BOTSW let's you in on the life of a little girl that is forced to grow up quickly.

As already stated, Quvenzhane Wallis is superb in this film as a nine year old girl who is figuring out many things in life, while quickly learning about courage. All of the attention and accolades are well deserved as she truly delivered a performance that really drew you in and forced you to invest in her emotionally. Also, not to be overlooked, is the work of Dwight Henry who was just a superb.

One of the cool things about BOTSW is the filming of the village, called the Bathtub, which was simply great cinematography.

All in all, a movie worth the watch, and all of the accolades from it's growing reputation.