March 28, 2013
On a night where the Miami Heat's incredibly impressive winning streak came to an end in a game filled with high drama, the idea of "streaks" are a hot topic. There are so many great streaks throughout the course of history that span so many topics that are impressive. In the midst of the discussion, I'll throw my two cents into the "streaking" debate piggy bank as well. The following Pondering 10 are my top impressive streaks.


[Side blog: What is the record for consecutive days of posts here on the DP? Answer at the end of the post] 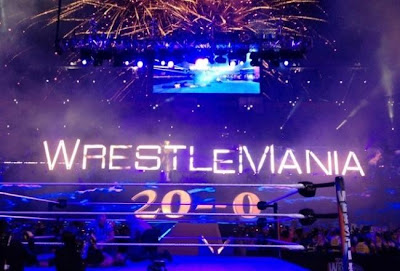 10. The Undertaker Undefeated Streak at Wrestlemania - You all know as a pro wrestling junkie that this would make the list. And while the outcomes of pro wrestling are pre-determined (I find the description of "fake" to be highly ignorant of the craft), the Undertaker's performance at Wrestlemania is always impressive, and at this point, the "streak" sells itself. 20-0 and counting...

9. Chicago Cubs World Series-less Streak - I'm sorry, but if you haven't won the World Series in 104 years, that is pretty impressive. You really have to tip your cap to this, because it takes quite the effort to continue to run into bad luck like that. Heck, the Cubs haven't been in a World Series since 1948! And I thought I had it bad with the Knicks and Jets. 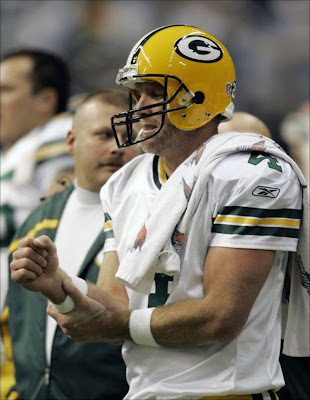 8. Brett Favre's Consecutive Starts Record - While I am not a huge fan of Brett Favre, his ability to hold this record says volumes about his resiliency, determination and toughness. Not easy at all when you take the hits an NFL quarterback does, and still suit up 297 times in a row. 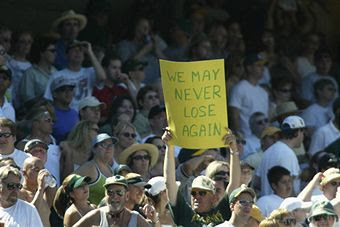 7. Oakland Athletics's Winning Streak - While it isn't baseball's best winning streak (1916 New York Giants won 26 straight), Oakland's winning streak had many elements that made it memorable and remarkable. Unlike the Giants in 1916, the A's did so in a league of the world's best players. They also did it with a minuscule payroll during a time of "Moneyball" tactics (which of course inspired the book and movie). And of course, the streak was done by a collection of nobodies that came together to string together 20 awesome wins. 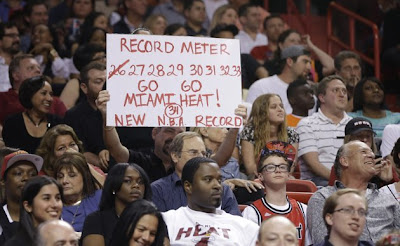 6. Miami Heat's Winning Streak - Well, we just saw the end of it, and while I very much root against the Heat every chance I get, the streak was very, very impressive. Much like the A's, I believe winning 27 in today's athletic climate with better talent, intense media scrutiny, and world awareness is much harder than that of the past. 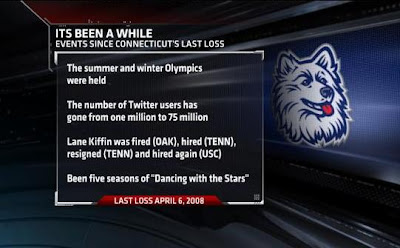 5. University of Connecticut Women's Basketball Winning Streak - 90 Games in a row. Need I say more to validate this streak of dominance? 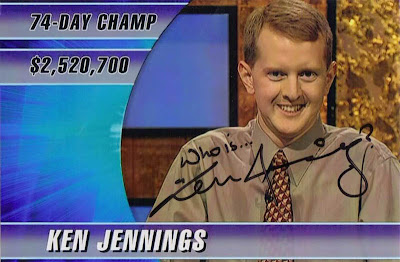 4. Ken Jennings Jeopardy Winning Streak - I'm a Jeopardy nerd. I've always loved the show since I was young, and still do. I watched Ken Jennings winning streak of 74 games until he was finally knocked off. Streaks don't always have to be athletic, and this one is about as tough as any streak you'll come across. 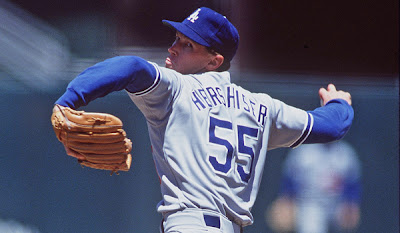 3. Orel Hershiser Consecutive Scoreless Innings - 59 innings of not giving up a run is downright insane when you think about it. The idea of doing this in today's game is really hard to wrap your mind around. Much like these two streaks... 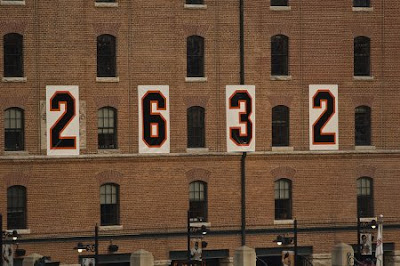 2. Cal Ripken Jr's Consecutive Games Played Streak - 2,632 games of never taking a day or an inning off! He never got hurt and his performance never lacked to be removed from the lineup. Seventeen years of production and durability at it's purest definition. Imagine not taking any days of from work for seventeen years...yeah, didn't think so. 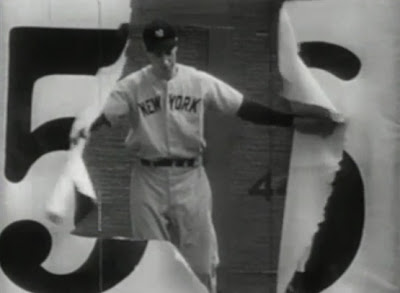 1. Joe Dimaggio's Hitting Streak - Hitting a baseball is - and has been proven to be - the hardest thing to do in professional sports. For a sport where you fail a heckuva lot more than you succeed, being able to string together a 56 game hitting streak is absolutely nuts! I honestly believe this is one streak that will never be broken. And if it is, it'll taken a really special individual to do it.