Who Is Fighting For Marriage? Just Marriage. 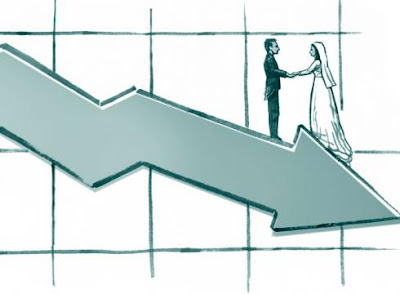 With the state of California looking (actually re-looking) into how it handles the seemingly always-controversial agenda of same-sex marriage, the idea of marriage as a whole is once again at the center of examination by this nation. It's quite astonishing how far this country has come in a mere few years. It wasn't very long ago when the majority of our nation was against the idea of legalizing same-sex union. However, here we are in what seems like a trend of a younger generation moving for "marriage equality".

But as this movement progresses, and in some ways becoming the trendy thing to do, the issue of same-sex marriage has become the it - injustice-  that many are now picking up for. However, as I watch the legal proceedings and the comments, and the arguments, and the foundation slogans, and the Facebook and twitter movements, I wondered why marriage, the hetero-sexual kind, hasn't been focused on.


Now I know what you're thinking: "Because they already can get married, idiot!"

True. However, this generation that seems to hold the issue of same-sex marriage at the highest of the highs when it comes to injustices, wrong doings, and societal failures, is the same exact generation that has proven and exemplified that marriage is not at that important to them. (Why is Marriage Becoming Obsolete in America).

I've always felt that one of the biggest issues facing our society today is the lack of fundamental values in raising children, and a lot of that has to do with the crumbling of the household structure.

After all, the rise in single-mothers homes, fatherless children, and overall marriage-less households is alarming.

The continuing trend of male children growing up without male role models is a point for immediate action. And the cycle continues as men continue to become less and less desirable for female counterparts.

And how about the fact that 48% of children today are born to unmarried women? Almost half!

This is touched on in an opinion article by David Frum on CNN.com where he lays out how the decline in marriage affects our future, most notably, the overall well-being of tomorrow's generation.

I continue to find it fascinating how same-sex marriage has become the focus of today's society. However, as evident from the alarming statistics, and many of the outcomes and studies from Mr. Frum's article, the focus - and real issue at hand - is that of heterosexual marriage.

Who's fighting for marriage? Just...marriage.