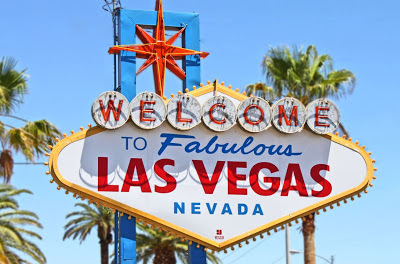 Well, it's my last day here in this place, and as I said last night, I am pretty much itching to get out of here. Whether that is from the smoke in the air or the sin-filled filth that is everywhere in this city, I'm not sure, but heading back East is something I can't wait to do.

I miss New York City. And, yeah, I miss my wife.

So with that said, here some other tidbits from my days here:

I enjoyed four days and three nights here at Planet Hollywood in a room that was not as luxurious as my room was my room at the Venetian during my first trip, but it was still pretty sweet. No scenic view hovering over the city with the Vegas mountains in the backdrop, but having a king-sized bed and a huge television in my bathroom was pretty sweet.

And yes, I totally watched SportsCenter every morning while showering.

The food, probably my favorite part about Las Vegas, was awesome. I tried and ate at a variety of places ranging in health and price. From the awesome Chicken Cordon Blue sandwich at Le Burger Brassieri, to trying Pink's hotdogs for the first time, to the Sugar Facory's signature club sandwich, to lunch at Todd English's Olive, to the complete awesomeness that is Gordon Ramsey Steak, and finally, my favorite, all you can eat pancakes at Cheeseburger Las Vegas, everything was great. Except now, I need to run about forty miles to offset the four day splurge.

I hate Delta airlines. Second time I've flown with them, and both times have been terrible. The cabins are super small, seats uncomfortable, and the overall experience is just annoying. Maybe I'm just used to the awesomeness that is JetBlue.

On my flight out here, I sat in a middle seat that was too small for me. I had to endure watching a man who had an entire row to himself lay in the fetal position and constantly and consistently rang for the attendant. In fact, before we even got to the runway for take off, he called for a pillow and blanket. To add to the nightmarish flight, a man in the seat behind me snored like he was trying to be heard back in New York. Yes, Delta, not a fan at all.

Finally, the NIRSA conference was great. I sat in on many sessions that are sure to help me in the present and the future. I also was able to make many connections and contacts from the other schools in our conference, as well as many other schools from around the nation. I came away from it with a high sense of knowledge on where I would like to my intramural program, and a ton of ways and ideas on how I can do it.

All in all, this is why I was here among many of the other occurrences. Therefore, a successful conference means a successful trip. I plan on checking out in the next five minutes...I won't miss Vegas, but, because of what Vegas has meant so far to my career professionally, I'll never forget my trips out here.