The Beginning of the End for Amar'e Stoudemire 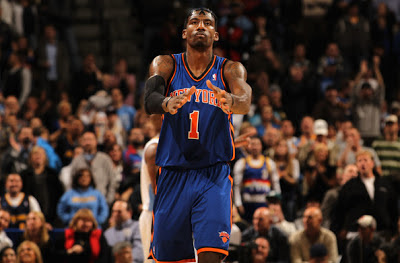 When the news came down that Amar'e Stoudemire will miss the next six weeks due to ANOTHER knee injury, you simply had to feel sorry for guy. Whether you are a Knicks fan or not, seeing any great athlete crumble before your eyes the way he has been is disheartening. Especially, when we know the potential that is on the other end of the current misery and disappointment.

We've seen it so many times, especially, with basketball players. Anfernee Hardaway comes to my mind as someone who was extraordinary but saw that ability diminished due to injuries. The Phoenix Suns' highly regarded medical staff believed he would never be the same player he was in year three of any deal, the year Stoudemire is now in. Kudos to them, as they were right once again.


There was the detached retina. No problem. Of course, the huge microfracture surgery. Ok, he proved everyone wrong. Then came the bad back, the depridement surgery on the knee, the mandated limited minutes, and now, another depridement surgery on the other knee. And now we have the hobbled Amar'e Stoudemire who seems destined for more time either on the injured list or under strict minutes restrictions for the rest of his career.

Actually, Stoudemire has never been the same since his MVP-like, first season in the blue and orange. A season he looked like he was some sort of prophet after claiming at his press conference, "the Knicks are back". And if you want to put something interesting in the history books, it seems the fate of Stoudemire turned the minute the Knicks added Carmelo Anthony. Obviously, I don't believe there is a real correlation there, but in there does lie another disappointing tidbit to know that we never saw (and probably never will) the very best of Anthony and Stoudemire together.

And most of all, you hate to see this because Stoudemire is simply, just a good dude! In a world of self-serving, attention-hungry, athletes, big STAT is antithesis of it all. His story is phenomenal, even if you aren't a fan of him or his game. Stoudemire easily could have become a statistic with a drug-addicted mother, troubled brother, and bouncing from school to school during his childhood. But as the famous Notorious B.I.G. quote goes, he turned a "negative into positive."

He has been known to have several charities, help many kids in the Orlando area, and one of my favorite gestures of his, treated the entire Madison Square Garden staff (yes, everyone!) to catered lunch on the day of a game as a way of saying thank you.

As a Knicks fan, it's hard to watch this happen. I know Stoudemire will never be the same player after this, and thinking from the Knickerbocker point of a view, he's set to kill our cap space for two more years with uninsured salary. Yet, it's hard not to feel for Stoudemire who took the chance as the guy when there wasn't much to the New York Knicks.

Stoudemire has overcome several injuries that should have derailed his career. However, as well know, it was only a matter of time before it all caught up with him.

Either way, it's the beginning of the end of Amar'e Stoudemire as we know it, and we're all about to watch it.