Are You Smart Enough To Be a NFL 1st Round Pick? 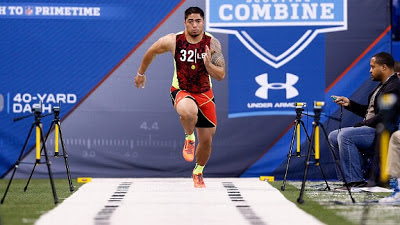 Recently, it was made public that team representatives were asking prospective NFL players during the combine questions about their sexual orientation. Some were asked if they were heterosexual, with one player stating that he was asked, "do you like girls?"

As the NFL investigates the situations, the recent allegations have stirred up controversy and debate. Some say that teams should be allowed to do so in hopes of selecting the right player to mesh within their existing team locker room. Others claim that the question was that of psychology in which a question is tossed out to force the brain away from stock answers the responder has prepared. And finally, of course, many wonder why it would matter, since such a question is illegal within the realms of a job interview.


Personally, I'm in the majority. Why should it matter? One of the beautiful things about sports is that regardless of what you look like, where you come from, who you love, or even any character quirks you might have, the only question should be - can you play?

That's the way it was growing up playing in the driveway, the streets and the parks, and that is the way it is in the big arenas and stadiums. Can you play?

This is why I find the NFL's propensity to make the combine (now another television event) a big deal really tough to take seriously. These players who are just a number (literally) and treated like pieces of meat aren't  enough reasons to garner negative feedback, but they then include these ridiculous tests as if any of it actually matters. None of it is particularly relevant, and none of it carries any type of scientific surety.

And because there are some large financial responsibility tied to the selection, a personal interview and background check is surely acceptable. 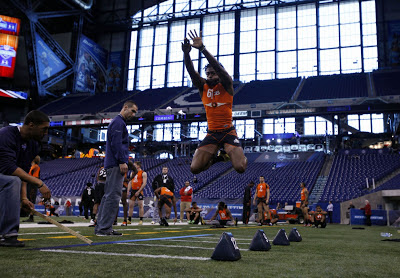 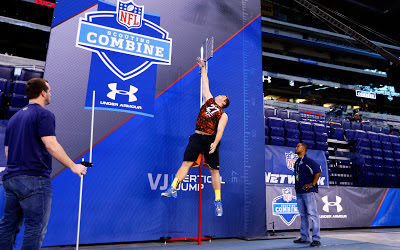 But for the heck of it, let's just assume you, the reader, are a top quarterback prospect from [your choice of school]. Regardless of whatever accomplishments you've achieved in the collegiate ranks, and even if you lucked out on a good day and maxed out on all of the 40 yard dashes, long jumps, high jumps, bench reps, and all of the other ridiculous activities they force you through (sounds like a Crossfit challenge, doesn't it?), it comes down to answering these stupid questions the correct way.

When choosing teams down at the local Y, no captain says, "excuse me, can you quickly answer these three questions?"

In fact, how many times do the fastest and strongest guys translate to the on-field/court performance of that particular sport? Not very often. Actually, it's very unlikely.


So, here goes. The following link is a website that offers a mini Wonderlic Test (used in NFL combine). It is 15 questions, and you have three minutes and thirty-six seconds (very odd time) to answer them all. The test will grade your answers, and even give you a comparison to an NFL player's score.

Are you smart enough to be an NFL 1st round pick?

If you're like me, you'll know that it shouldn't matter. Can you play is still the main question, with your character being the deciding factor on whether you are a candidate.