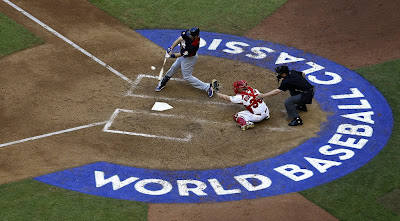 I really can't wait for the next World Baseball Classic. It's no secret that I've been a fan of the idea since the Olympics began it's mission to completely kill it's own credibility as a worldwide athletic event (High Five for the World Baseball Classic). However, after the third installment of this tournament, it is quite clear that it has been a complete success.

When the ratings for one of Japan's games tripled - yes, TRIPLED - the ratings of the last record-breaking Superbowl here in the states, you realize what this tournament has become and will become. Sometimes it takes time with anything new to catch on, but the importance and rapid growth of the WBC after three tournaments is shocking.

WBC is to Playoffs as March is to October 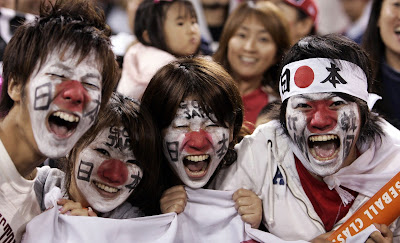 These games were intense. The crowds were insane (especially the Puerto Rican and Japanese crowds), and  the games were played as if it were October. I know teams worry about players getting hurt, but how awesome is it to get your players reps in high pressured situations very early?

There were fights, pitchers duels, game winning hits, underdog stories, and in the end, a very entertaining team standing tall.

The WBC definitely earned itself respect and gained a reputation after this tournament.

It's Okay to Have Fun 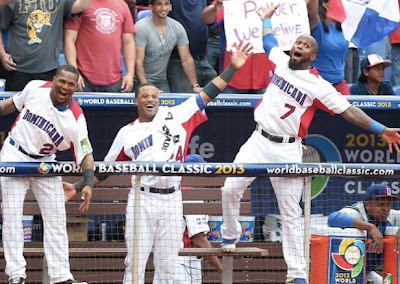 How much fun was it to watch the Dominican Republic play baseball over the past two weeks? Sometimes, writers, players, fans, and everyone else come up with or hold baseball to these wacky unwritten rules that it makes the game seem at times very robotic. Showing any type of individual style or emotion is apparently "showing someone up".

I loved the dancing, the hand gestures, the smiling, and the entire bench coming out onto the field for every run scored. Even the fist pumps, clutch screams, and the end of game celebrations. I loved it all.

Look, baseball is a passionate game. It's also a children's game. And it's also a game of failure. When things go right, why not celebrate that? It's fun for us as well to see players who aren't emotionless robots on the diamond.

Speaking of showing emotion, the US really lacked in that department compared to the other teams in the tournament. Maybe it was the buttoned-up and straight-laced nature that plagues the Major Leagues in which these players are accustomed to, but many times it seemed as if they carried a burden of trying not to lose instead of playing to win.

Sure there were the moments of the newly named, "Captain America", David Wright. And I honestly don't think it was a coincidence that the U.S. fell apart when he had to leave due to injury.

Of course the U.S. players were genuinely into the tournament. However, while the truth could very well be contrary to my opinion, watching from a distance on television, Team U.S.A. lacked the type of energy and  a certain self-investment which the other countries had. Wearing those three letters across your chest and writing All-Star names into your lineup doesn't equate to victory.

When are we going to prove we are the best in this sport? I fully expect the USA committee to think long and hard about putting together the right team, and not a collection of all-stars. I also believe a lot of U.S. players will now want to be a part of the tournament, and the pursuit of redemption for the Stars and Stripes. The urgency is there similar to when USA basketball suffered it's dry spell away from gold, and it's written in the stars for the U.S. to really make a run at a title in 2017.

And if we get those committments, something has to change...

That's right, I said it. I absolutely dislike (hate is a bad word) fans that came up "reasons" why not to watch this. The mere fact that some in this country find their regional team, or the team they root for, to be of more importance is unbelievable. This is especially true, if you're a fraud-bag!

I'm sorry, I might be taking a page out of the politics 101 handbook (or even Jets owner, Woody Johnson), but country comes over team. Yadier Molina, who stated the WBC title for Puerto Rico would probably mean more to him than a World Series championship (some can't even comprehend this) had a terrific follow up quote, "my teams and owners may change in MLB, but I will always be Puerto Rican".

Look! They Ain't So Bad

I came close to watching all of the WBC games, and it's hard not to notice that the academies and schools set up around the globe are paying off. It's good to see teams like Brazil (who quickly is adopting the sport from various reports) and Chinese Tapei grow tremendously. Are they Major League ready? Of course not. However, the tools are there, and this tournament will go a long way in feeding the upcoming worldwide draft baseball so desperately needs.

[Side note: How about a round of applause for Bud Selig, and what he has done to improve the game of baseball? Tremendous work.]

Okay, let me set the record straight immediately...I'm not a traitor, or a spy. Sure I called my fellow Americans out, and am now praising the Japanese, but c'mon, how can you not love the way this team plays?

Japan had a far inferior team than their two WBC championship teams, yet they made it to the semi-finals, and if not for a huge missed sign and base running blunder, they would've challenged for another. 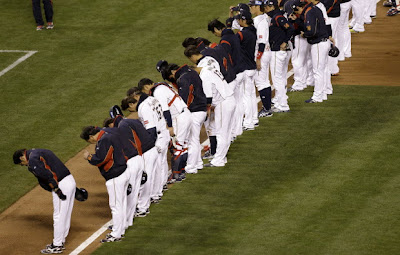 The Asian players coming out onto the field, removing their caps and bowing to their opponents and the fans  after every game was new to me, but was a gesture and custom in Asia that really showed their respect for this game. Very classy.

I tweeted this during the WBC championship game, but how awesome was the coverage by the MLB Network? The thorough analysis, post-game coverage, game breakdown - all of it - was just great stuff. It was during this coverage that I'm going to dread FOX and ESPN covered games this year. ESPN does a pretty good job on Sunday Night Baseball, and FOX leaves a lot (see: MLB All-Star Game) to be desired. It's almost like FOX are killing time until NFL season.

Either way kudos to the MLB Network...best damn channel on television!

Spring Training is Still Going On... 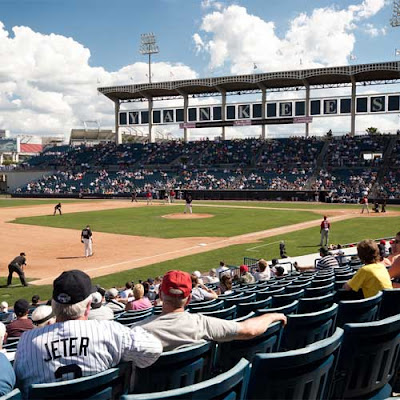 Ugh...is April here yet? After that high octane stuff, it's back to pumping the breaks for the Cactus and Grapefruit leagues and going through the motions.