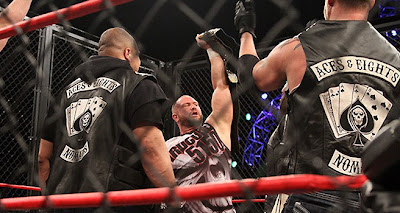 I saw it coming for awhile now. Actually, we all saw it coming. Bully Ray was the President of Ace's and Eights. Even if you didn't know, you had to be at the very least suspicious of Ray never being attacked by the group and suddenly becoming the honorable babyface we all know he isn't made to play. Bully makes for a decent babyface, but there is a reason he goes by Bully Ray. Because he's a damn good heel.

But you know what, who cares if we saw it coming? Predictable? Sure, but so what? After all, we all had John Cena/The Rock pegged for a rematch coming up. And let's be honest, the entire card for Wrestlemania is rather predicitable right now.

But again, so what?

Those who are criticizing the end of Lockdown this past Sunday are those who are the type of fans where nothing moves them because they are too wrapped up in their own cynicism to enjoy anything.

While I felt the match left a lot to be desired, the story here was the heel turn and the eventual unveiling of Ray behind the whole shebang. Whether you've been intrigued by the Ace's and Eights storyline (I've had mixed emotions on it), the payoff was definitely a way to draw everyone in again to see where this goes. The promo cut by Bully Ray (2012 DP Pro Wrestler of the year) was the stuff old-school wrestling was made of. You simply lost yourself in the moment as he ripped into Hogan and Brooke which really made for great TV, and now, the classic pending revenge story line that is very intriguing.

Classic stuff. Especially for someone that's always enjoyed others get the best of Hulk Hogan since the eighties. I know, I'm a rare breed.

[Blog Sidenote: And much props to Bully Ray who continues to deliver the best work in the business.]

What placed the cherry on top of this situation was the awesome sight of fans throwing trash in the ring. Takes me back to the old days of the NWO. Lockdown has the chance to be that "Bash at the Beach" moment for TNA. Bully Ray really is that good to pull off the "super villain-heel", and everything is in place for some great television through the summer.

Whether you had this pegged or not, you have to admit, this has turned into an very intriguing deal for TNA. What will the fallout of Lockdown be? How will Bully Ray explain his role in Ace's and Eights (and some potential story line holes)? And how will Hogan get revenge when he can barely walk?

Yes it was predictable, but it was very, very interesting, and is leading to some exciting and - hey, how about this? - unpredictable things to come.