No More Excuses. Time For Accountability 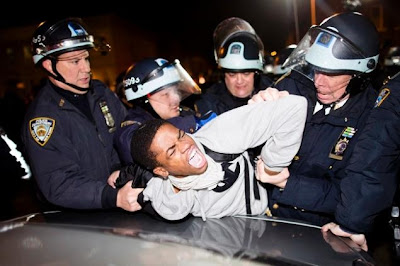 "The excuses need to stop. The shifting of blame and responsibility needs to stop.

It is all up to the black student. What do you want out of life?

The opportunities are there. They are everywhere. We just need to do better."

I wrote those three years ago in response to the decline of black students in New York City's specialized schools. Today, as the riots in the East Flatbush section of Brooklyn in protest of the killing of a child by the NYPD, those same words come flooding back to my mind.

If you aren't familiar with the story, you can read it here. In summary, a young sixteen year old kid affiliated with the Bloods gang was shot and killed by two NYPD officers (one black and the other Hispanic  after he allegedly pointed a 38. caliber gun in one of the officer's face. A gun was recovered from the scene, but witnesses claim to not have seen the kid with a gun.

The riots first and foremost are downright ridiculous and head scratching. Why are these residents destroying their own neighborhood and the businesses owned by hardworking individuals? It just reeks of others using a family's loss to engage in looting and lawless behavior.

However, my biggest issues with this is the fact that our current society, and this new generation we now live in completely ignore the idea of accountability. I'm not vouching that the kid deserved to die, because that's just a crazy and outlandish reasoning to get behind. However, when the kid is a known gangbanger, is brandishing a gun, it's hard to really justify and vilify the NYPD.

The sister of the kid claimed he was "afraid of guns, and carrying it for a friend, and was trying to alert police about it."

C'mon, when are we going to start taking responsibility for our actions?

And to delve even deeper into this, the black community has no one to blame other than it's self. As a man of color myself, I can vouch that even if these folks wish to make this situation an issue of racism, it logically cannot be unless you have already made up your mind to do so no matter what.

It's getting really tiring of some in the black community that continue to play the racism card in situations like this. Does racism still exist? Of course. Are their issues among the NYPD. We know it.

Yet, in a case like this, where evidence adds up tremendously in favor of the officer's actions, making this child seem like an innocent victim shot for no reason by cops in the 'hood is just outright ridiculous.

There is a man of color as President. There are opportunities for you - for everyone - to better themselves, and to better each other.

We have to do better.

Stop blaming everything on everyone else, besides where it should be held - ourselves.

It's time for us to begin accepting responsibility for our actions, and our fate.

I have to believe the Reverend Dr. Martin Luther King would be ashamed to see such actions, such lives wasted, and such uneducated reasoning from a group of people he fought so hard for.

But as per the case, we'll get the usual statement from the mother denying all links of her child to gangs and crime, and the usual roll-of-the-eyes verbiage that her kid was a "good kid" and was innocent from everything.

And you know the civil suit is coming.

So typical...and yet, so sad. All the while, frustrating as heck as a law-abiding, tax paying, hard working individual. Especially, one of color that is embarrassed by this nonsense.

Plain and simple, we have to do better. Much, much better.