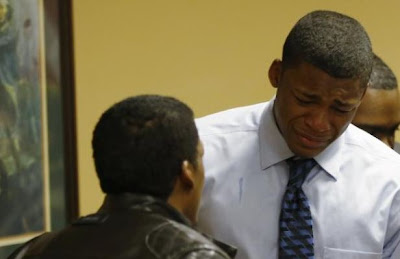 I'm having a really tough time developing any type of remorse for the two young men recently found guilty in the Steubenville rape trial. I understand that what we saw transpire are two young men who will never be the same, and will forever be affected by this case.

Their bright futures of college and athletics now flushed. Their names, now a mere Google search away from this resurfacing to haunt them. And the stamp of "sex offender" will always follow them like the permanent black mark that it is. Even if they attempt to leave Ohio.

One of the two young men uttered, "my life is over" when the verdict was announced which created what was said to be a very emotional environment. As we try to make sense of this trial and situation, it seems there has been a slight sense of remorse from some for these two young men who made a decision at such a young age that will affect their lives before it began. There are also a few who think the decision was a bit strong and even uttered that dreaded phrase in cases like this - "they're kids".

However, what about the victim? What about that sixteen year old girl who will also live with this forever. Humiliated by those photos that were passed social media around forever.

Sure, we can dwell on the question of where were the parents? After all, sixteen year old children drinking heavily, some to the point of total intoxication is a cause for concern, and a glaring red flag to notice the lack of parental supervision in the situation. However, such a question is for another time to discuss.

The fact of the matter is justice was served. Sixteen years old is not too young to understand that what was indeed done was very wrong. They knew what they were doing, and they indeed knew it was wrong as they attempted to delete evidence as well as persuade others connected to the situation to alter the truth.

It took a national explosion of this story to really put pressure on this small town that holds its High School football players on pedestals similar to many other small towns in this Football-is-religion nation of ours. Shame on the people of Steubenville that attempted to cover up this story in hopes of protecting the team. The Steubenville police department included, who really should find it hard to sleep at night.

And now we read that even Steubenville High School coaches tried to cover it all up.

Nonetheless, when it comes down to it, rape is rape. And it's hard to feel sympathetic for any minor, any adult - anyone - that engages or assists in such a crime.

We've become a bit soft in our nation if we feel sorry for rapists.

Justice was served. For that sixteen year old girl. And just a little little bit for many who were never able to come forward under similar social pressured situations in their towns.

As I said regarding the recent Kimani Gray situation here in New York City (No More Excuses, Time For Accountability), it's time we've begun holding ourselves and everyone else accountable.

Don't feel sorry for those two young men. We all make choices in our lives, and we all have to deal with them.

They made theirs. And it's time to face the consequences of those actions.