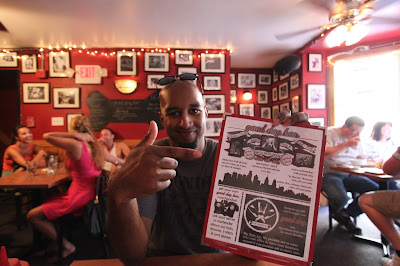 It's pretty hard to hate Guy Fieri. However, it is pretty easy to be envious of his job as host of the hit show, "Dinners, Drive Ins, and Dives" on the Food Network. I actually wish I had his job (The Pondering 10 - Jobs I would Love to Have)

A favorite show of the tag team partner and myself, we enjoy watching Fieri travel across the nation to let us in on some of the best hot spots for meals across the nation. Despite having a few places here in Brooklyn that were on the show, we decided to visit a place in Philadelphia on our random trip there. Why? I guess because it just fit in with the randomness we were looking for that day. And two, because the idea of eating at a recommended place in another city just seems like a novelty. It's the reason why we found Sonic to be so amazing (2013 Bucket List - #32 Eat at a Sonic).


During our stay we decided to have dinner at a place called "Good Dog Bar". Another reason it was selected was because of the tag team partner's research through Yelp. After all, she is an elite member, so one would think she would know, right? However, oddly enough, most of the places that have been on the show have received poor to fair reviews on Yelp. Good Dog Bar was one of the better ones, so we were hoping to turn what looked good on TV into a delicious meal.

Unfortunately, we were wrong.

Good Dog Bar seems like an awesome place to hang out, watch a game, have a few drinks with friends - you know, what you would do in a bar. However, the meals were very, "ehh". Nothing spectacular, and really, nothing terrible to not make you not want to go back. It just was, well, average.

I had fish tacos, which were the special for the day, and the tag team partner had their supposedly famous Mac and Cheese. We also enjoyed an appetizer of cheesesteak empanadas. The wife wasn't wowed by her meal, and me, I felt the fish tacos weren't the best. They seemed like they lacked a certain something and were a bit dry. Also, it was the first fish taco I've ever had which the fish looked like an actual fishstick. Just seemed a bit amateur. Maybe it's just me. Also didn't help that I had fish tacos earlier that week from another restaurant in Brooklyn which were quite awesome.

Despite the average food, the floor layout of the bar is pretty unique. It seems like it was an old block townhouse with three apartment levels. Now a bar, floor one is a natural bar; floor two, a dining area; and floor three is a recreation area with foosball, billiards, a jukebox, and darts.

What makes Good Dog bar unique is it's devotion to dogs with black and white photos everywhere of different dogs. One of the managers also shared with the tag team partner their continue efforts of charities for dogs and such.

Oddly, after trying one of these places, and not being wowed, along with the multiple average Yelp reviews, I've become highly skeptical of the quality of the places on the show. Then again, maybe it was just bad experience.

I'm looking forward to trying several of the spots here in Brooklyn. If those fail as well, then I'm going to call the bluff about the choices selected on the show.

Either way, it's just another item off of the bucket list. Number seventeen completed. Boom.