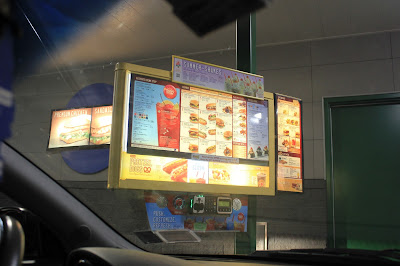 I know that's what some of you are thinking when you read the title so let me explain. The tag team partner and I (the wife for you new DP devotees) have seen countless commercials for Sonic whenever we're watching television. No matter the program or channel, those commercials appear. And if you're familiar with them, they are very funny.

So naturally, like any interesting or entertaining commercial, you are intrigued by the product. Hint: let that be a lesson to you marketing executives out there that approve some of those dopey commercials on television. You're wasting your money, and our time.

Nonetheless, always looking for a good place to eat (who isn't?), we looked it up and realized that there are actually no Sonic locations in the greater New York City area. Just when you think New York City had everything, a random fact like there being no Sonics gets dropped on you.


So, during our random trip to Philadelphia, we researched and realized that there was indeed a Sonic not too far from Citizens Band Park just over the river in New Jersey. Score! A small and random town called Audubon, New Jersey was the location we found ourselves headed towards after our random trip to Philadelphia. Ironically enough, the Sonic was next to a Chick-Fil-A, another eatery I have yet to try and have heard is a must-have from friends as well as students from work who reside in the south. "Oh my gosh, you HAVE to have Chick-Fil-A!!" I had plans to be a complete fatso and have both that night. Unfortunately, Chick-Fil-A had just closed.

As for Sonic experience, the Drive-In concept is totally unique and retro at the same time. We sat in the car wondering how the heck to order, and once we did, we sat there like two dopes as if the idea of someone bringing food to the car was just invented. In a weird way, it was a total child-like experience, especially when added to the randomness  of the one-day road-trip.

All in all, Sonic isn't all that bad. And yes, their milkshake menu is impressive, not to mention they are really good. And most of all, Sonic is pretty economic as well.

For those of you who have been to Sonic, no worries, I'm totally okay with you making fun of me. I get it, believe me.

But for this New York City kid, things like In and Out Burger, Carl's, Sonic, and Chick-Fil-A are foreign to me despite it being the usual to the locals in those regions. I've now had two of them on that list. Gotta enjoy them when I can, no?