A-Rod Trying to Make Fools of Us - Again! 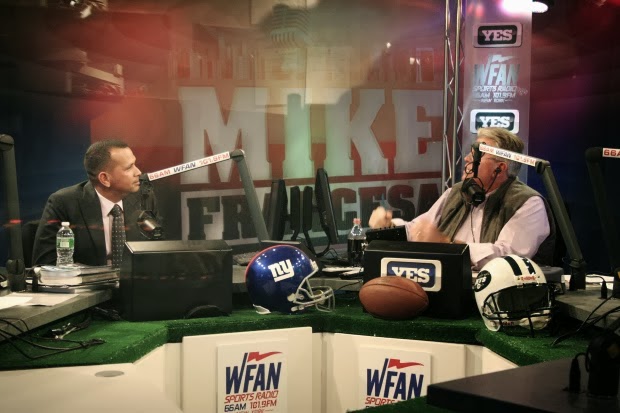 Alex Rodriguez, one way or another is money. They guy is simply money. And that was on display again as he stormed out of his arbitration hearing in grand fashion, and of course, parlayed that into a must-see/must-hear (however you get your Mike Francesa dose, if at all) interview that pretty much is the talk of the sports world.

I say it all the time (and will again)...Alex Rodriguez is the most fascinating athlete I have ever seen in my lifetime. Ever.

His battle with Major League Baseball continues to evolve and swirl into a different kind of mess each time there is an update, and quite frankly, as we all know, this is far from over. A-Rod is essentially fighting for his baseball-loving life at this point, a sentiment he stated very clearly to Francesa. But let's be quite frank, he's fighting for the $76M-plus remaining on his mega-contract with the Yankees.

Yesterday's grandstand, as epic and dramatic as it was, was contrived, practiced and rehearsed. At this point it'll be difficult for anyone to persuade me else wise.

Do I think Commissioner Selig should have to testify? Sure. However, if an arbitrator selected by both MLB AND A-Rod's camp doesn't think so, then why the spectacle?

Seems to me someone is trying to get out of having to take the stand themselves. And that is likely the case here.

Also, there is no part of A-Rod's performance that felt real in his interview with Francesa.

The mentioning of his daughters to humanize him; Attempting to portray himself as a "New York City" guy to rally this city behind him; The now (and for the first time) denial of using PEDs and any other wrong doings in this situation; The faux-tough-guy mantra of settling the issue man-to-man without attorneys (which was laughable). It all was planned. All of it. A lot of rhetoric in there to humanize him and make him seem like a victim here.

And let's be honest, if you listen and/or know Francesa, he adores and has been a big time A-Rod supporter (pretty blindly may I add) during this whole deal. But you can't deny his media intelligence as that interview was just another white bronco for "New Yahhhhhks Numba One, OK!".

Sadly, a few people have bought into the rouge, and have turned this into an episode of hate towards A-Rod, a story of a man against the system, or of course as the case with everything these days - an act of racism.

And that's all Rodriguez and his lawyers are attempting to do right now - win public support all while steering the attention in any direction other than the real topic at hand.

He claims this is a witch hunt and a "farce", and that he's done nothing wrong. He went as far as attacking Bug Selig or as he called him, "the man from Milwaukee".

Francesa, in the midst of chumming it up with Rodriguez to talk Miami Hurricane football as well focused on letting the world know he is best buds with the star-crossed ballplayer, never once asked Rodriguez why would an entire league innocently come after one player if they didn't have grounds to do so? Why would other players connected to Biogenesis settle with baseball, including Ryan Braun who once won a round going head-to-head with MLB over drug-related issues (Braun Fraud)?

A-Rod has lied to us before, and he's trying to make fools of us again.

But until he answers the real questions that are in play in this investigation without putting on staged stunts and lawyer-ed up statements as sideshows, I refuse to let A-Rod make a fool of me and turn him into a persecuted hero.