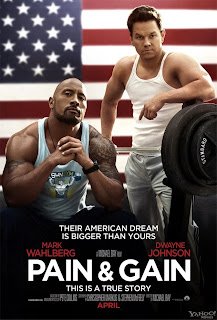 The true story of a group of bodybuilders, who kidnap and extort their way to wealth, get caught up in a myriad of situations which not only result in their capture, but reveals their insane stupidity.

Paul Doyle: We go through with this, nobody gets hurt right?
Daniel Lugo: No, man! We snatch him, we grab him, signs a few signature, we give him a protein shake! He won't even know what happened! I watched a lot of movies Paul, I know what I'm doing!

This is such a weird film. Not because it's awkward and unique, but because you simply cannot believe that this is based on a true story. In fact, during the film, as the shenanigans are going on, the makers remind you with a caption on the bottom that says, "this is STILL a true story". Just good stuff.

Honestly, getting past the idea of this film being true will blow your mind enough that you will immediately look up the true story afterwards online, which really wasn't altered all too much for Hollywood.

As for the film, the real plot is made for film, and it provides a weird "three stooges" feel as the body builders from the Sun Gym goof and gaff their way through situations which are just downright stupid. Yet, at the same time, their reasoning throughout the crimes make for hilarious moments, some which are subtle enough to really make you crack up. How can you not love "The Rock" sitting in a Pontiac Fiero?

As always, Wahlberg continues to grow into one of my all-time favorites, and Dwayne Johnson (He'll always be The Rock to me) and Anthony Mackie are great in their supporting roles.

This film isn't one that will blow you away, but is intriguing enough because of the absolutely too-good-to-be-true plot.