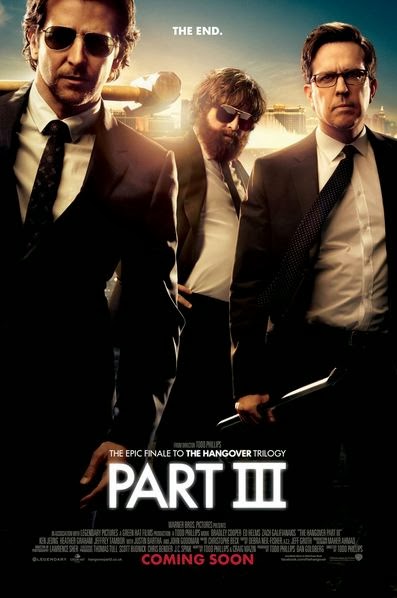 The Wolfpack reunites one last time to track down Mr. Chow and put an end to a series of events that began after the famous night in Las Vegas.

After Alan's recent actions becomes unbearable, the family stages an intervention to get him the help he needs. Alan doesn't respond well to it, and begins to act out to his mother, the family's maid, and friends.

"You don't get it Stu. You. Just. Don't. Get it. I have over 60 apps on that phone. Do you know how much time and man hours it would take to re-download those apps?"

Going into watching The Hangover III is the hope that it wasn't The Hangover II, which was disappointing. Fortunately, this film went the route of not looking to recreate the chemistry and magic that made the original, but of something new and looking to wrap up the trilogy.

What makes The Hangover III enjoyable is in fact the way it incorporated the previous two films while also making the third installation feel unique with a different plot. From having to chase Mr. Chow, the reference of Stu's former "Tyson-like" tattoo, the emergence of "Carlos" the baby, and even an appearance by "Black Doug", the nostalgia was perfect, and the ending was a nice bow on the trilogy. The only thing missing was Mike Tyson himself. Though, that's part of the charm of the original.

The Wolfpack shenanigans are entertaining as expected, but once again, it's Zach Galifianakis and his portrayal as "Alan" that makes the film.

The Hangover III is a nice wrap-up to a memorable trilogy. Not as bad as Part II, but not as good as the original, yet, still very much a good watch.