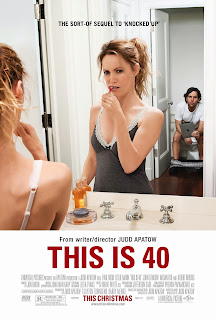 A spin-off for the characters of Pete and Debbie from Knocked Up, the married couple are now coping with life as they are set to turn 40.

After Pete has a rough day, the lies, feelings, and pressures from both come to ahead in a truthful argument.

"I want an Asian sister"

This is 40 is awful. There is really no way else around it other than just telling it like it is. The film is directionless with a plot (if it exists) is absolutely atrocious. The humor is awkwardly forced to the point of head scratching. And the characters seem so distant and so un-relatable, you truly end up not caring about any of them in the end.

Other setbacks included the too-common and really uncomfortable vulgar language by and around children in the film (Director Judd Apatow's own kids), the random scenes that went no where, and overall for this viewer, the huge waste of John Lithgow's talents and abilities.

Judd Apatow struck gold with 40 Year Old Virgin, and hit it big with Knocked Up, unfortunately, his spin-off around the Pete and Debbie characters from Knocked Up simply bombed. Big time.

This movie was terrible, and to make it worse, it felt like it was never going to end with a two hour and fifteen minute running time. You simply will hope it gets better, and to save you some time, it actually gets worse as it progresses.

Some movies are so bad their good. This is 40 is just flat out bad. Really, really bad. Like, no-good bad. I would never recommend this film. In fact, I'll be quite alright if I never seen it ever again.