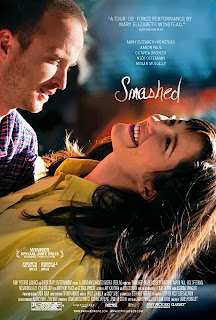 A married couple learns about the depth of their relationship and it's dependency on a shared love for alcohol when one of them decides to get sober.

After losing her job due to her attempt to be honest and real in her attempt at sobriety, Kate falls off the wagon after being three months sober. She returns home where she eventually has a building confrontation with her husband, Charlie.

"It's hard to live your life honestly."

Smashed is one of those rare hidden gems in the indie circle that often goes unnoticed among the masses. The film which takes the topic of alcoholism and the road to sobriety depicts the struggles and the ranging problems and deep issues that come with it.

Mary Elizabeth Winstead was just great in her role as the struggling young adult coming to a cross roads in her life. The film has some really talented performers around her in supporting roles such as Nick Offerman, Octavia Spencer, and Megan Mullaly, which really increases it's quality and message.

All in all, Smashed is not a film that will blow you away with cinematography or overwhelming presentation. It's a short (81 minutes!) subtle film that really opens the door on the road and struggles to sobriety that many face.